Subscribe
Share This
Steven M. Sipple: Go ahead and roll your eyes, but this game may be biggest of Frost era
0 Comments
Share this
GET EXCLUSIVE TEXTS!
Sign up for breaking news and analysis from our Huskers experts
1 of 2 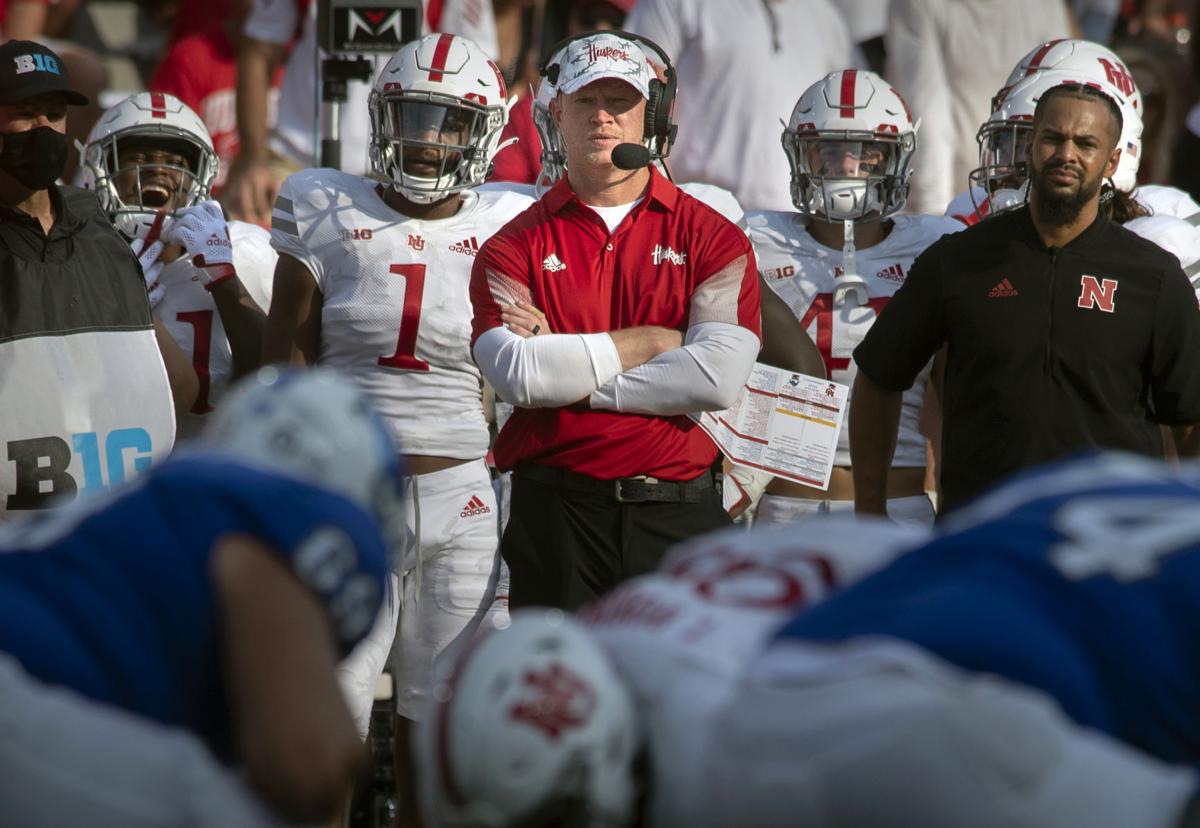 Nebraska coach Scott Frost looks on from the sideline during the second half against Buffalo on Sept. 11 at Memorial Stadium. 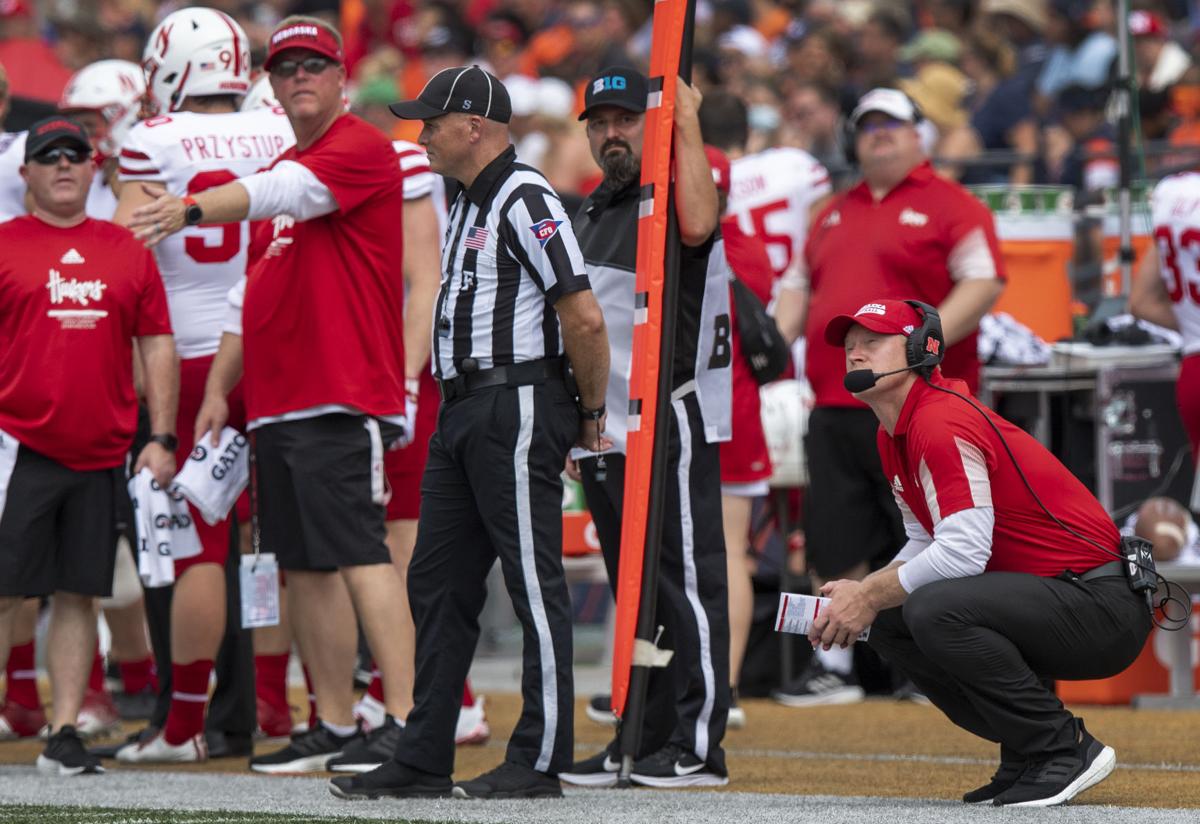 Nebraska coach Scott Frost (right) watches the action on the field in the first half against Illinois on Aug. 28 at Memorial Stadium in Champaign, Ill.

Perhaps you've noticed that there's just a wee bit of pressure on Scott Frost in his fourth season in charge.

It's not exactly a joyous celebration of the sport around here. Every game feels like a referendum on the program.

Yeah, it's one of those seasons. Weighty. Cumbersome. Just an absolute blast.

So, in the spirit of the ongoing conversation, a question: Is Nebraska's game Saturday night against 20th-ranked Michigan State the most important of the Frost era at NU?

Go ahead and roll your eyes, but one can make a strong case for it.

You certainly can say that a Nebraska win would ease much of the pressure on Frost, at least for a moment. A win would give Husker fans something significant to celebrate. Imagine that, some actual fun. After all, NU hasn't beaten a nationally ranked team since toppling No. 16 Michigan State in November 2015. Since then, it's been 14 straight losses to top-25 squads.

The latest was last week at then-No. 3 Oklahoma. Nebraska, however, was in position to pull the upset until the final minute. In fact, it became evident to me by late in the first quarter that the Huskers belonged on the same field as the Sooners — who have made four appearances in the College Football Playoff since 2016. Granted, OU appears set to take a step back this season. Whatever. It's still a strong outfit.

Alas, Nebraska came up short, again, this time 23-16. During Frost's tenure, the Huskers are 5-12 in games decided by seven or fewer points. Even the Huskers themselves are tired of the "we're getting close" conversation.

"I just want our guys to be like, 'Oh, we did it!'" said Nebraska sophomore outside linebacker Garrett Nelson, who leads the team with five tackles for loss.

Coming close "just pisses me off now," Nelson added. "It's time to get over the hump. Everybody knows that. Oklahoma was an opportunity that we just did not capitalize on, which sucks. But there obviously are some positives we can bring out of it."

If Nebraska (2-2, 0-1 Big Ten) were to defeat Michigan State (3-0, 1-0), Husker fans might look back on the Oklahoma game as a turning point in Frost's tenure. We'll see on that. He's 14-22 (9-18 Big Ten) at the school. Skeptics abound. But he has a good team this season, albeit a flawed one. He'll have to manage his way around a so-so offensive line and a kicker who's missed five of his last six field-goal attempts. Special teams have been an ongoing issue.

On the other hand, Nebraska's defense consistently rallies hard to the ball, plays well together and always seems eager for a good fistfight. Meanwhile, Husker junior quarterback Adrian Martinez is in the midst of a career resurgence. He's as dangerous as ever running the ball, and in the past three games has completed 73.1% of his passes (49-for-67) for an average of 261.7 yards, with four touchdown throws and only one interception.

Against Oklahoma, Nebraska was one receiver (Oliver Martin) away from having its full complement of front-line players at the position. Frost was right throughout the offseason: It's the best group of wideouts he's had since he took over at NU.

In short, there's plenty to like about this Nebraska team.

But a loyal and fervent Nebraska fan base wants to see discernible progress. Hell, Husker players need to see discernible proof of progress lest they begin to lose faith in what they're being taught. Beating Michigan State on the road would represent discernible proof. Plus, a Husker victory would set up an excellent chance for Frost's crew to get to 2-1 in the Big Ten, as a home game against scuffling Northwestern is up next, followed by tough tests against Michigan at home and Minnesota on the road.

Yes, Nebraska's program badly needs a shot of momentum — a shot of momentum that could propel the program to an all-important bowl appearance. The Huskers haven't experienced bowl season since 2016. If they were to fall to Sparty, the path to a bowl game gets even more rocky. And let's face it, if NU were to fall to 0-2 in the Big Ten, you could basically forget about a division crown. The Huskers, with a daunting schedule ahead, essentially would be out of the race before it begins in earnest. That would be dispiriting for everyone involved.

To be sure, if Nebraska loses this week, fan interest would wane. If the Huskers prevail, fan hope would abound. Vibes would turn positive in a hurry. A heavy conversation would lighten considerably, at least for a week.

Man, Frost's program could use some positive vibes about now.

There's another factor to consider. Call it the confusion factor. Many Nebraska fans might feel confused if Michigan State's unexpected rise to 3-0 this season is real. After all, Spartan coach Mel Tucker is in only his second season in charge and has 17 transfers from FBS schools. Keep in mind, Lindy's preseason preview magazine ranked MSU dead last among Big Ten teams.

"It's how complete they've looked so far that I think is surprising to everybody," said Graham Couch, columnist for the Lansing (Michigan) State Journal.

Nebraska fans would enjoy a pleasant surprise now and then.

How about a victory against a ranked team on the road?

Yeah, it would feel monstrous, and just may lighten the mood around here.

Photos and videos: Oklahoma holds off Nebraska 50 years after the Game of the Century

Nebraska coach Scott Frost looks on from the sideline during the second half against Buffalo on Sept. 11 at Memorial Stadium.

Nebraska coach Scott Frost (right) watches the action on the field in the first half against Illinois on Aug. 28 at Memorial Stadium in Champaign, Ill.