Subscribe
Share This
Steven M. Sipple: Pondering a level of grace for Hoiberg as well as some football questions
0 Comments
Share this
GET EXCLUSIVE TEXTS!
Sign up for breaking news and analysis from our Huskers experts
1 of 3 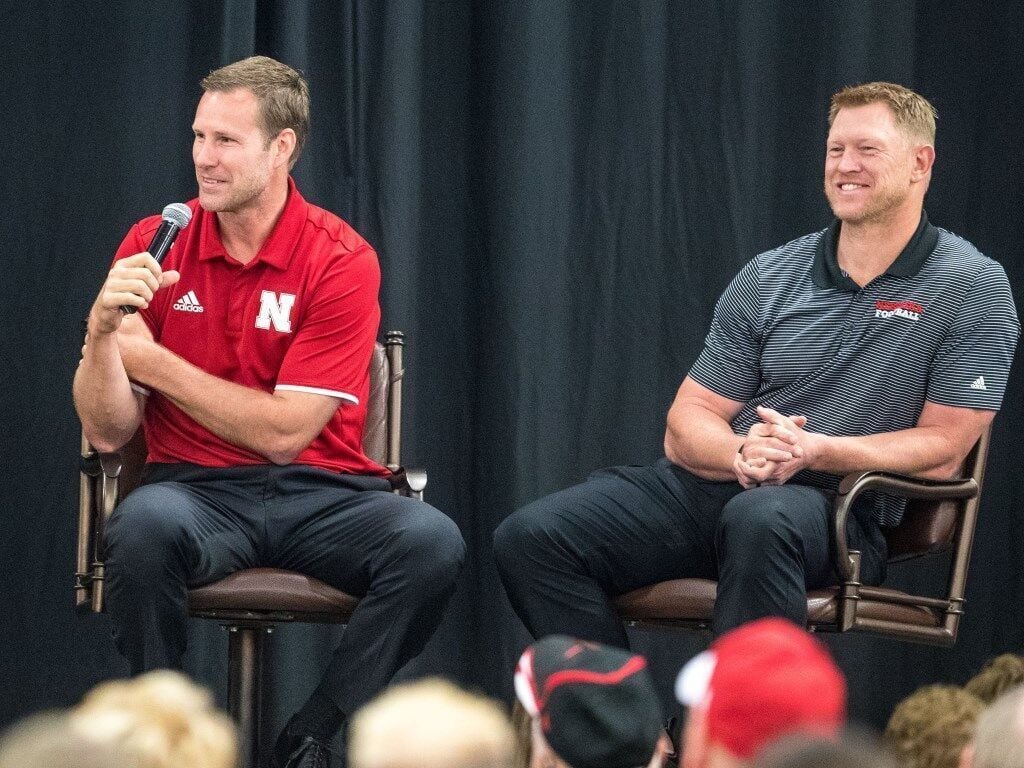 Fred Hoiberg, left, and Scott Frost appeared together at a Big Red Blitz stop in Norfolk in 2019. 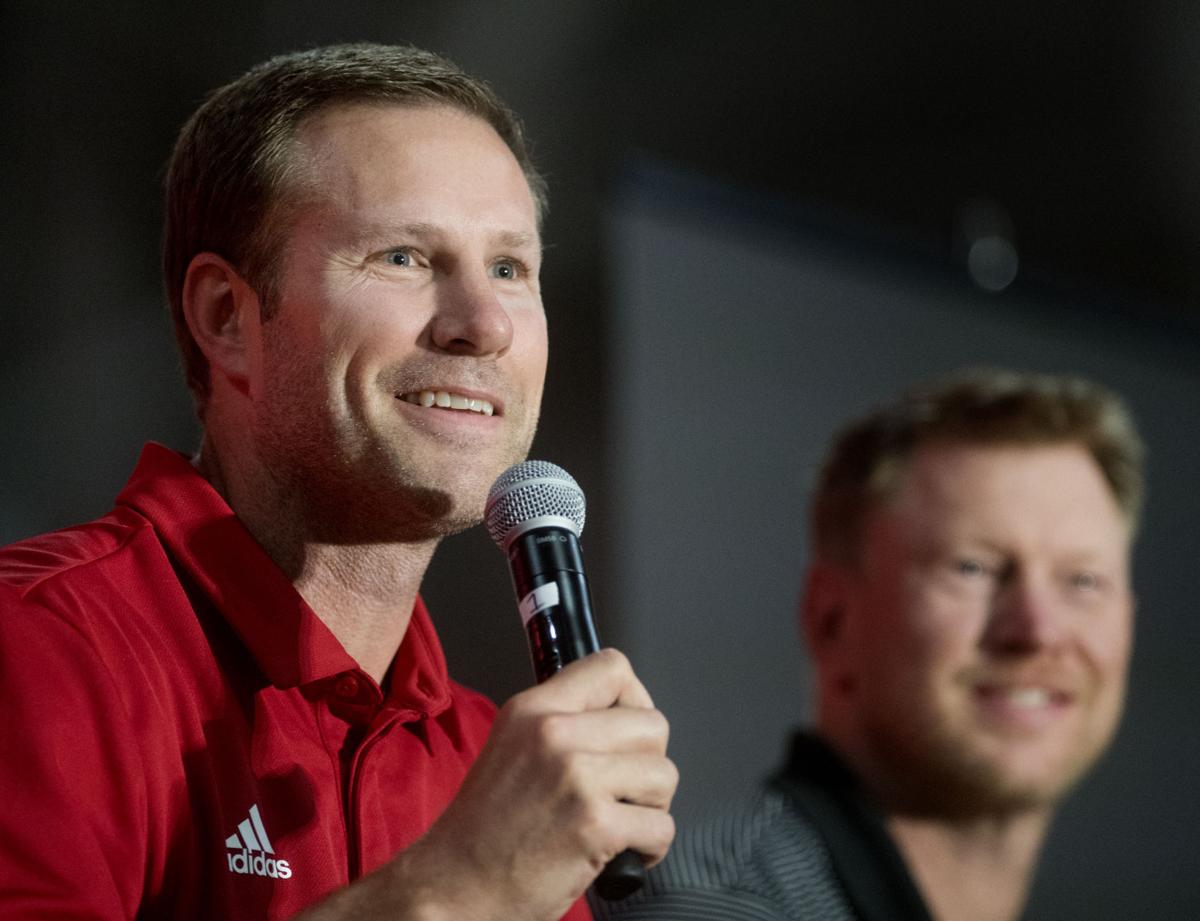 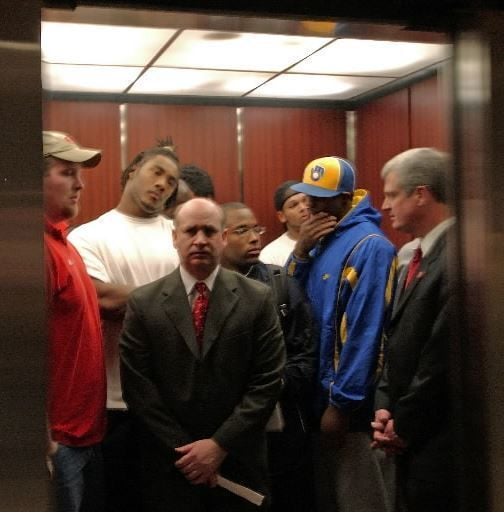 We know one way to help spice up the rest of the summer.

You came through once again with superb questions, so let's get this rolling.

Why do you constantly try to equate Scott Frost and Fred Hoiberg? Take out the COVID year — Frost had two full years to show progress. He regressed. Hoiberg had one year. Not to mention, Frost came in shooting his mouth off about the Big Ten adjusting to them. Hoiberg did nothing of the sort. He just went to work. End of the day, it’s not the same and yet you get worked up when Hoiberg is rightly treated with more grace than Frost. — Jeff W.

You clearly listen closely to "Early Break" on 93.7 FM. Thank you.

You might consider that my way of thinking has been impacted on some level by covering a Nebraska football program that twice fired head coaches following nine-win seasons. Perhaps I've become a bit callous over the years. But consider that Frank Solich was 58-19 (.753) in six seasons before getting the axe. Bo Pelini was 67-27 (.713) in seven seasons before being jettisoned.

So, tell me more about grace.

I get it. Hoiberg inherited a depleted roster in 2019, and had little time to revamp it. But his two-year record in Big Ten play is a woefully inept 5-34 (.128). Pope Francis would struggle with the idea of grace when pondering 5-34.

My guess is Hoiberg doesn't expect much grace with that record.

He's a hard-core competitor. I'm sure all the losing grates on him. If it doesn't, there's something seriously wrong.

We should add that Hoiberg benefits from the "good-guy factor." He's unfailingly pleasant and professional. His family has embraced the community. What's more, he's seemingly made significant upgrades to his roster, highlighted by five-star shooting guard Bryce McGowens. That said, I don't want to go too far with this sort of praise because Nebraska fans have been burned too many times by fluffy offseason optimism.

(Yes, I've often contributed to it).

One other thing: I don't dismiss the idea of closely evaluating programs during the COVID-19 year as quickly as others might. Along those lines, I deeply appreciated the aggressive manner that Frost and his program attacked the situation last summer, even if the ensuing results (3-5 record) didn't always reflect it.

Hoiberg's program was hit hard by COVID. Hoiberg himself was hit hard. It was a trying time for a lot of people in the program. The Huskers were on pause for basically a month and had five Big Ten games postponed. They came off the pause and went 3-12, including a loss to Penn State in the conference tournament. But the effort was almost always excellent and you saw signs of improvement.

No question, Hoiberg and company deserve a level of grace. But I don't think it does anyone much good to overdo it.

I expect Nebraska football to win at least nine games this season and make a high-profile bowl game. Is that high or low? — Mark H.

You may be shooting a bit high.

"I think they could end up with a 7-5 record," the Miami-based Sterling, who appears on 50-plus radio shows nationally, told "Early Break" listeners Friday morning. "If everything goes correct, maybe 8-4.

"I still think they need guys at receiver and running back who can get the ball, break a tackle and go 70, 80 yards," he said.

What's more, Sterling has been highly critical of Nebraska quarterback Adrian Martinez. But Sterling speculated that Martinez might feel less pressure this season because he isn't being pushed for the starting job.

"Maybe that's the difference and he does play much better this year," Sterling said.

Maybe having NIL cash in his pocket will ease some stress as well.

Can you ever remember a Nebraska football season where expectations were so low? — Bill M.

I've covered Nebraska football full time since 1995. Been to every game, home and away. I can't remember expectations being as low as they are now.

The closest you could come might be the summer preceding the 2005 season. Nebraska was 5-6 (3-5 Big 12) in 2004 — Bill Callahan's first season as head coach. The Huskers in 2005 broke in a first-year quarterback in Zac Taylor, who wound up being pretty salty. He threw to a couple young receivers in 2005 (redshirt freshman Nate Swift and sophomore Terrence Nunn) who turned in strong seasons.

Yeah, this year's Nebraska crew would take something along those lines.

In your career, what was the most tensioned-filled football press conference you've attended? — Anonymous.

Solich, then 59, was fired one day after leading Nebraska to a 31-22 win against rival Colorado in Boulder. He became the first NU head coach to be fired since Bill Jennings after the Huskers finished 3-6-1 in 1961.

Late 2003 was a remarkable period for the program. The fan base was split. Solich was a loyal soldier. He had just revamped his staff. You know the story.

Many folks thought Nebraska lost its way that day. History shows those people were on to something.

I’ve sent this question numerous times to you. Why don’t you talk about how bad our Husker softball coach is? She needs to go. Past her prime. — Kim M.

This past season, Rhonda Revelle notched her 1,000th win at Nebraska, a milestone never before reached by any coach in the history of Husker athletics. Yes, she endured a rocky summer of 2019 as allegations of player mistreatment surfaced. She weathered that storm, but the program is still working its way out of it.

This much I know: Revelle displays incredible passion for her work, for the university and for her community.

She's widely respected in these parts. Yes, she can get the ship righted.

No question, her heart is in the right place.

Photos: All of the sights from the return of the Red-White Spring Game at Memorial Stadium

A native of New Orleans, Mickey Joseph spent five seasons on Ed Orgeron's staff at LSU, and left an indelible impression as recruiter and coach.

Steven M. Sipple: Martinez's remarkable grace and three other takeaways on his departure

Nebraska quarterback Adrian Martinez was forever calm and positive in an environment that often became tense and negative because of all the losing.

Those with knowledge of Cam Jurgens' situation say recent projections suggest he could be drafted in the middle rounds — the third, fourth or fifth.

Bill Busch joined Nebraska's staff in February as a defensive analyst. Could he become the Huskers' next special-teams coach? Don't rule it out.

Martinez often tries to complete passes while evading defenders as if he were dodging cars in rush-hour traffic. He never complains — about anything.

A certain local columnist is extremely interested in whether Scott Frost can right the Big Red ship, which indicates a belief it still can happen.

Just get to mid-November with a chance to win the division. If Nebraska can regularly manage that standard, it'll mean it's playing sound, hard-nosed football on a consistent basis.

Iowa's side seemingly regards the rivalry with a bit more oomph, although Nebraska's level has risen during Scott Frost's tenure as Husker head coach.

Steven M. Sipple: Headaches pile up quickly for Hoiberg this season, one standing above all

NU coach Fred Hoiberg may have as many problems right now as he does weapons, and it's clear what tops the list: stability at point guard.

Nebraska cornerback Cam Taylor-Britt obviously plans to finish out the season, as opposed to opting out to prepare for the NFL Draft.

Fred Hoiberg, left, and Scott Frost appeared together at a Big Red Blitz stop in Norfolk in 2019.