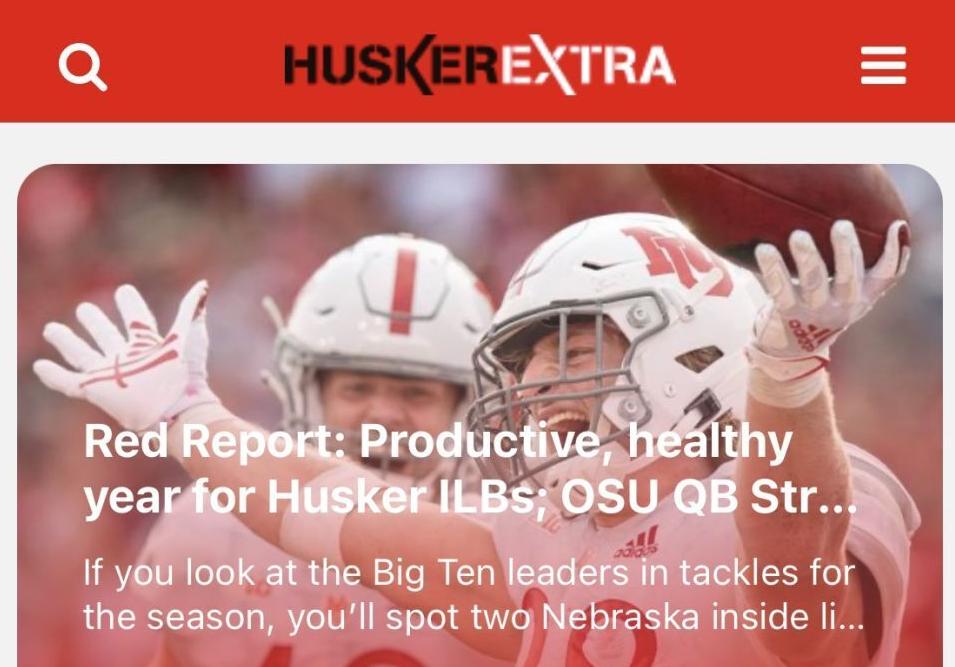 The new HuskerExtra app is available through the Apple App Store and Google Play.

The Husker football season, most would agree, has been a roller coaster — the promise of a decisive win against Northwestern, the heartbreak of narrow losses to Oklahoma and Michigan and the frustration of defeat at the hands of Illinois, Minnesota and Purdue.

Even the consistently strong volleyball team hit a rough patch. But there’s been one pretty consistent, high-level performer — the new HuskerExtra website.

And now it’s getting even better, with a convenient and customizable app that will serve you up all the best Husker sports content, packaged how you decide and accessible anytime, anyplace on your smartphone or tablet.

Launched in August, HuskerExtra debuted as a website, combining all the Husker sports coverage from the Journal Star and the Omaha World-Herald. Then it added exclusive features — like the Sip ‘n Sam Showdown — bringing together the most trusted voices from the Husker sports beats.

Available now in the Apple App Store and Google Play, the HuskerExtra app combines all the website’s great content and adds an ever-growing list of new features. Right off the bat, subscribers can customize their sports feeds, getting their preferred sports news displayed more conveniently. A comprehensive schedule will create a one-stop shop to see who the Huskers are playing and when in every sport.

Subscribers can download the app from the Apple App Store and Google Play, log in and start the experience. If you’re not a subscriber, it’s as easy as going to huskerextra.com and signing up at the $4.99 per month introductory rate, or you can purchase your subscription in the app using Apple Pay or Google Pay, where offers may differ. For readers who had the Journal Star’s old HuskerExtra app, it will automatically update.

The app builds on the interactive experience — the community of Husker sports fans — that HuskerExtra is all about. Stories, video, emails and texts keep fans in the game — even when there aren’t any games.

Oh, and one more thing. If you’re worried about supply chain issues and product shortages as you shop this holiday season, a HuskerExtra subscription makes a great gift. It delivers daily. It always fits. And red never goes out of style.

NU releases its 2022 baseball schedule: Here are some takeaways (and the full schedule)

After playing a pandemic-altered schedule in 2021, the Nebraska baseball team will navigate a return-to-normal schedule.

Mikey Pauley, the No. 1-ranked catcher in Kansas as well as a three-star quarterback recruit, will play both baseball and football at Nebraska beginning in the fall.

Nebraska baseball's 2022 schedule was released Tuesday, with 15 home games set to be played in March, a visit to an MLB stadium, and a return to a normal Big Ten format.

One of the headliners of Nebraska baseball’s freshman class is no longer with the program. Outfielder Chase Mason has left the team and is no longer listed on the Huskers’ online roster.

The new HuskerExtra app is available through the Apple App Store and Google Play.