Subscribe
Share This
Huskers' Big Ten Tournament hopes take another hit after Illinois turns game on 3-run blast
0 Comments
Share this
GET EXCLUSIVE TEXTS!
Sign up for breaking news and analysis from our Huskers experts

Three straight singles, including one to give Illinois a one-run lead, set the table for one of Illinois' best hitters.

Then Taylor Jackson clubbed a three-run to left-center field.

The Illini (27-19, 13-6 Big Ten) pounded 14 hits in an 8-3 series-opening victory against the Huskers on Friday night in Champaign, Illinois. The Huskers (19-28, 7-12) entered the day tied for ninth with Northwestern in the Big Ten standings and a full game behind eighth place.

Nebraska has five league games to try to make up ground on Indiana (22-26, 8-10) for the final spot in the Big Ten Tournament.

"We've been in this situation for about three weeks now, and when those competitive moments come in the game, there's only one team that's going to be on the right side of those," NU coach Will Bolt said on his postgame radio show. "If we want to get to the postseason, we got to make sure that we're starting to get on the right side of those competitive situations immediately."

'We're going to continue to show up': Husker baseball's postseason hopes on life support after series loss at last-place Minnesota

A rickety second and third inning Friday had the Huskers on the wrong side quickly.

Illinois post four runs in the third, with three of those coming off the bat of Jackson, who did not miss on an inside pitch from Shay Schanaman. Jackson's blast gave Illinois a 5-1 lead, but Bolt pointed to the prior inning, when Illinois scored one run, as a turning point.

After recording two quick outs, and getting the next batter, Brody Harding, down 1-2 in the count, Schanaman gave up a double. The next batter reached on an error when the throw to Colby Gomes at first base was dropped. A hit by pitch and walk followed.

The damage was limited to one run, but Schanaman had thrown 29 pitches in the inning.

"When we don't punch back offensively that next half inning he's got to get right back out there and that's (tough) to overcome in a short period of time ... and that's where the crooked number came from," Bolt said.

Schanaman gave up seven runs, six earned, in just 3⅓ innings, forcing Bolt to turn to a thin bullpen to cover the other innings. NU, however, did get help from Mason Ornelas, who ate up 4⅓  innings of relief.

Nebraska took a 1-0 lead in the second inning on Josh Caron's RBI single. But between Caron's hit and a two-run ninth inning, the Husker offense was ineffective.

Illinois starter Cole Kirschsieper faced the minimum in the third inning, struck out the side in the fourth, and retired the side in order in the fifth and sixth frames. He pitched seven innings.

Jackson had a pair of hits for the Huskers, who were held to six hits and struck out 12 times. Kirschsieper struck out nine, most of those coming over his later innings.

The Huskers and Illini will continue the series at 3 p.m. Saturday. 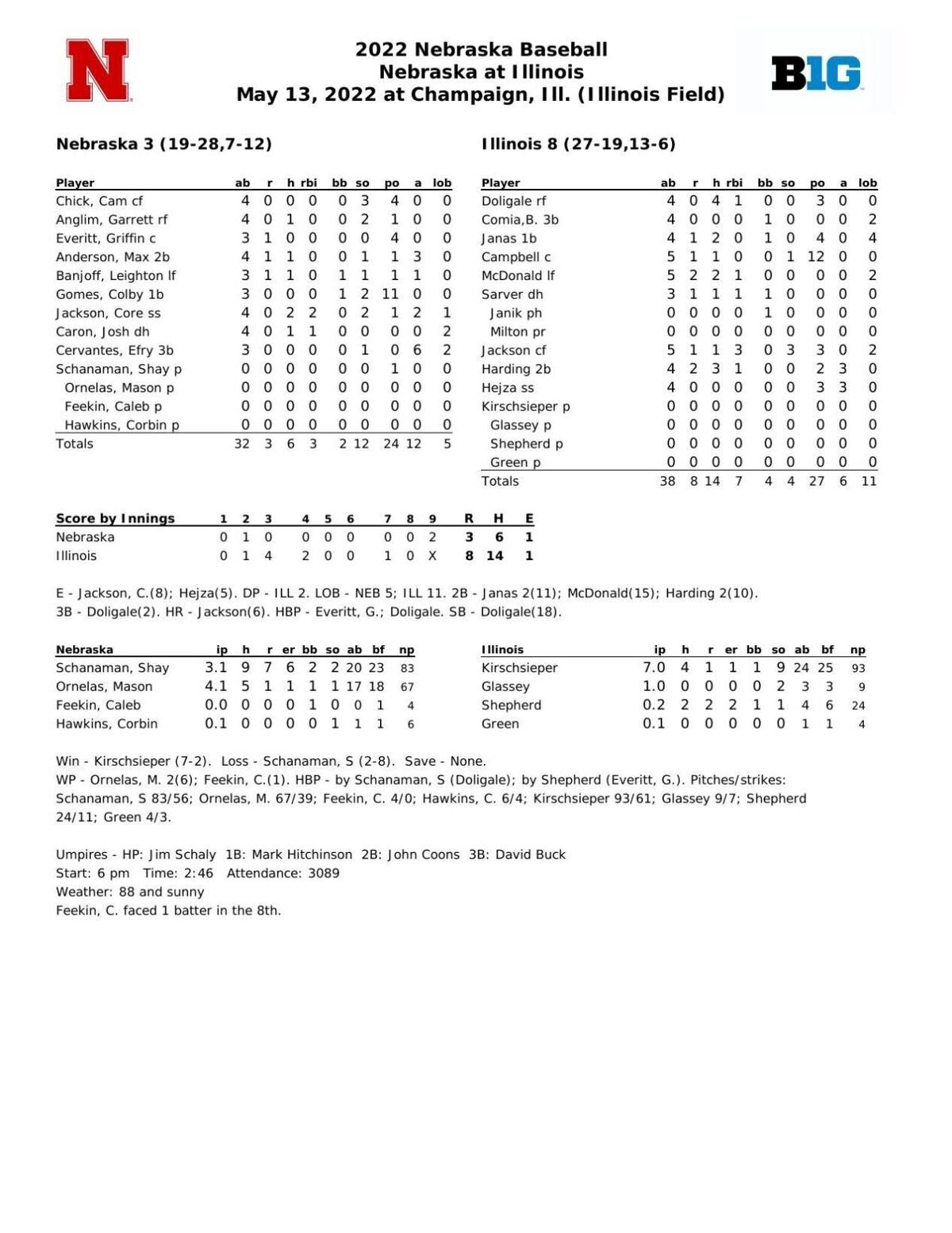 Shatel: Nebraska baseball has learned some hard lessons — and none were about the weather

Of all the lessons learned by Nebraska’s baseball team this year, the final one was the most cruel. Don’t put your fate in the hands of another Big Ten team, writes Tom Shatel.

Now, the only thing the Nebraska baseball team is rooting harder for than the Maryland Terrapins is mother nature. Chris Basnett explains.

With the postseason math clear, Husker baseball trying to focus on a simple equation: just win

Through everything this disappointing year has wrought on NU, a chance is all the Huskers are asking for. And they have one this weekend.

With the postseason door open, a familiar performance sends Husker baseball to 30th loss of the season

With nearly every team around them in the standings losing, it was all right there in front of Nebraska. Then the Huskers turned in a familiar outing.

Nebraska's odds for making the Big Ten tournament are long, but not impossible

Potential paths for Nebraska to play baseball beyond next weekend have become clear. And none are easy. The Huskers have virtually no margin for error if their season is to extend to the Big Ten tournament.

With a rainout cancellation at Purdue, Nebraska baseball's season will end Saturday against Michigan State, as the 2021 Big Ten champs failed to make the Big Ten tournament in Omaha.

Nebraska baseball's season on the brink after loss to Michigan State

Nebraska baseball’s offense was a no-show Thursday in a loss to Michigan State that put the Huskers' season on the brink.

This weekend is the last home series for Nebraska baseball's seniors. Or is it?

Whenever Nebraska baseball's season ends, the seniors will scatter for the summer not knowing how many will return in August. There are 10 Huskers who must make that decision.

Maryland earned the top spot after winning the regular-season Big Ten title outright. Rutgers will make its first appearance since joining the Big Ten in 2015.