Subscribe
Share This
Fred Hoiberg and Greg McDermott return to Iowa State to celebrate an old friend
0 Comments
Share this
GET EXCLUSIVE TEXTS!
Sign up for breaking news and analysis from our Huskers experts

LINCOLN — During the heart of recruiting season, Nebraska coach Fred Hoiberg and Creighton coach Greg McDermott took an evening off to surprise a friend.

Julie Voss, an administrative assistant for Iowa State basketball since 1977, retired two weeks ago, and the university honored her at a dinner last week. Voss told Cyclone coach T.J. Otzelberger not to bother Hoiberg and McDermott, but he didn’t listen. And when Otzelberger called, the former ISU coaches couldn’t say no.

“I think the fact that Fred and I drove back over there speaks to how we felt about her,” McDermott said. “I've been out of there for 12 years, and Fred's been out of there for seven or eight years. Obviously, there was a connection there and a friendship there. And I think that runs deep through the athletic department at Iowa State.”

Hoiberg met Voss when he was in seventh grade, when he was a ball boy for Iowa State. Voss remembers the Husker coach as a reserved teenager. He sat next to her at a game during one of his visits. Didn’t say much.

He was never too shy for the fans, though. Voss said Hoiberg always stopped for pictures if people asked. And they often did.

They asked for autographs, too. So many autographs.

Voss remembers “piles” of banners and basketballs sitting in the basketball offices during the height of Hoiberg’s stardom.

“Holy mackerel,” Voss said. “When he was here, I think there were more things to sign than at any other time. But he never complained.”

Hoiberg credits Voss for his even demeanor, both as ISU’s star player and its coach. Voss always knew what to say, he said, whether he needed grounding or cheering up.

On Hoiberg’s first day as Cyclone coach — his first day as anyone's coach — Voss defused his nerves: “This is pretty weird,” she said.

Hoiberg agreed. The old ball boy was the new boss.

That was just days after McDermott left Ames for Omaha in April 2010. He hated delivering that news. Voss hated hearing it.

They’d become close friends during McDermott’s four seasons at ISU, during which they shared many memories, road trips and lunches. McDermott liked treating the staff to meals at Pizza Ranch.

She would go because she enjoyed the company. Voss described McDermott as a “big sweetheart” during his tenure in Ames. For years, Voss felt like she had to tiptoe around the office after a loss. One wrong move could set off a grumpy coach.

McDermott and his staff were different. Always optimists.

If they lost a game, they’d forget it the next day.

Voss wasn’t accustomed to their measured approach. She asked Ron Smith, McDermott’s director of basketball operations, how they could get over disappointment so quickly.

“That’s how we are,” Smith said. “Come back the next day and start again.”

And last week, former Cyclones from several eras returned to Ames so they could celebrate her. Forty-five years. Nine head coaches.

“She could write quite a book,” McDermott said.

McDermott winked when Voss saw him at the party last week. Then they hugged — one through line between the Creighton and Nebraska coaches: “Great huggers,” Voss said — and the friends talked.

McDermott told her to enjoy retirement, that she deserved it. He kept saying, “Jules, I can’t imagine Iowa State basketball without you.”

Hoiberg asked about her health; Voss had heart surgery in 2019. Hoiberg, an open-heart surgery survivor, guided her through the procedure’s uncertainties like she helped him grieve former ISU coach Johnny Orr’s death in 2013, Hoiberg’s second season as coach.

Voss broke the news to him, and they mourned together.

If you ask The Mayor, as Hoiberg is known in Ames, Voss deserves the spot next to Orr’s on the program’s Mount Rushmore. Coaches couldn’t function without her, players saw her as a “motherly figure,” and “to work in the same office with her was really special.”

Last week, he and McDermott made sure she knew it. They told her they loved her, and thanked for all she did for them and the program.

“But I’m more like, thank them,” Voss said. They gave Voss adventures, opportunities and extended families she’ll never forget. She is weighing a road trip to all of her coaching friends’ games next season.

Of course, she’ll plan it around the Cyclones’ schedule.

“Other than my family, (ISU basketball) is pretty much everything to me,” Voss said. “I feel like I grew up there. ... It was just a cycle over and over of having another family and new people to love.”

Looking back at the last five seasons of Nebraska men's basketball

Nebraska basketball's new assistant, Ernie Ziegler, is a longtime Ben Howland aide and spent six seasons as a head coach at Central Michigan. Read what Howland had to say about his former assistant.

Former Husker Isaiah Roby explains why the Oklahoma City Thunder waived him, tells wacky G-League stories and explains his football background ahead of this weekend's Isaiah Roby Camp in Lincoln.

Three of the Huskers' first four games with be at Pinnacle Bank Arena, and NU could play up to seven high-major opponents during its nonconference slate.

Dalano Banton and Bryce McGowens had the strongest summers of the four Husker alumni who suited up. Here's a closer look. 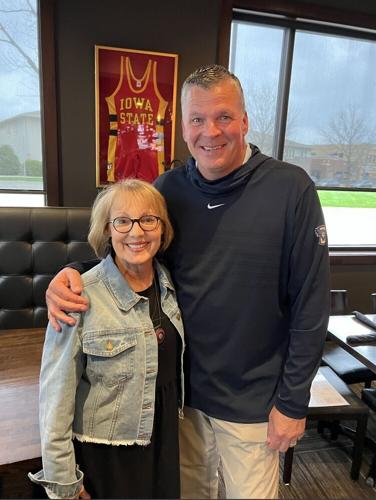 Greg McDermott and Julie Voss at her retirement party. 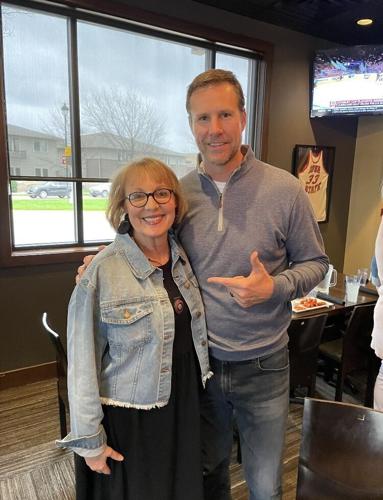 Fred Hoiberg and Julie Voss at her retirement party.