Subscribe
Share This
The return of Trey McGowens is imminent, and not a moment too soon for Husker hoops
0 Comments
Share this
GET EXCLUSIVE TEXTS!
Sign up for breaking news and analysis from our Huskers experts
1 of 2 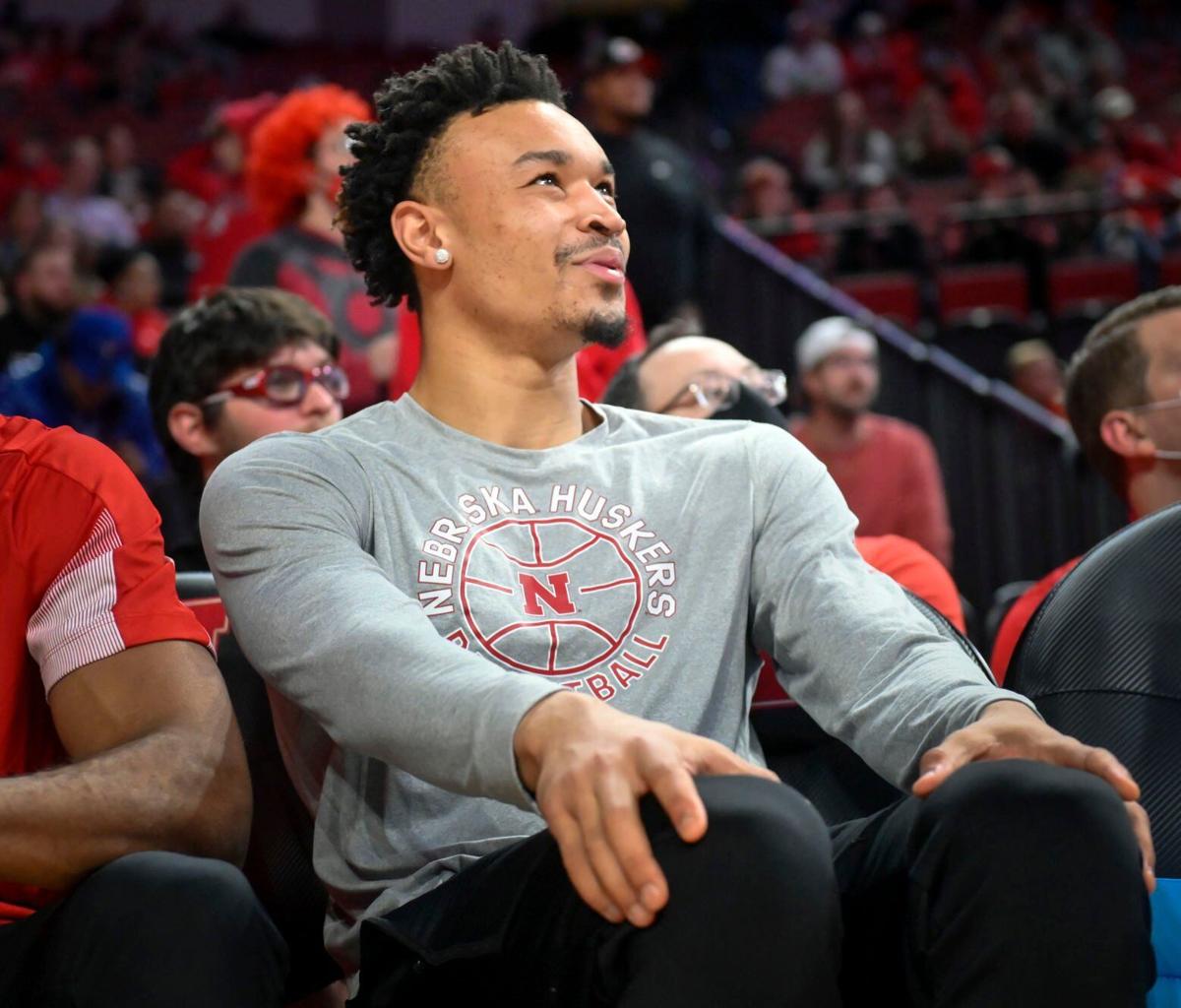 Nebraska's Trey McGowens watches the Illinois game from the bench on Tuesday as he continues to recover from a leg injury. McGowens has been cleared to return to team activities. 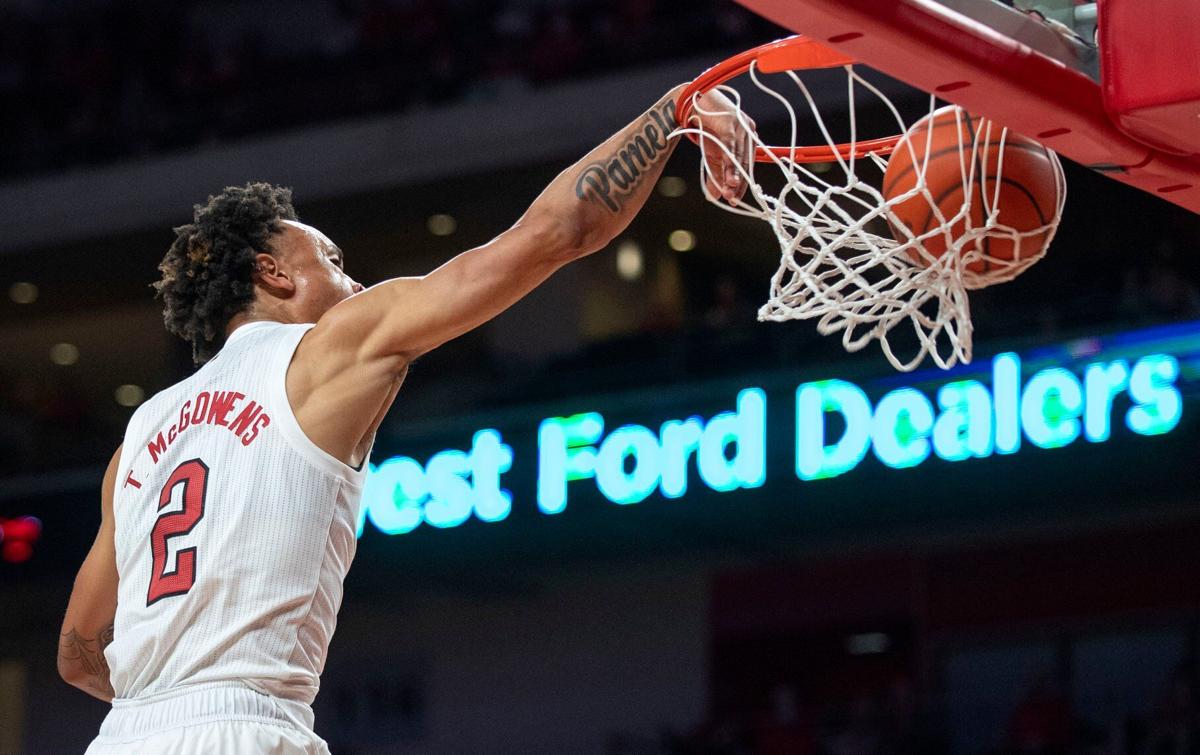 Nebraska’s Trey McGowens dunks in the second half against Western Illinois on Nov. 9 at Pinnacle Bank Arena.

Trey McGowens is back.

At practice, at least.

That in itself is a pretty large development for a Nebraska men's basketball team that has sorely missed its leader in the two months since he went down with a broken foot 10 minutes into the Huskers' third game of the season against Creighton.

But after a clean X-ray on Wednesday, McGowens got the all-clear to return to team activities and took part in Nebraska's two workouts prior to the team traveling to West Lafayette, Ind., Thursday to take on No. 7-ranked Purdue.

As of Thursday afternoon, it was still unclear if McGowens would play against the Boilermakers.

"Obviously he's got a ways to go with a lot of things — with timing, with conditioning, with still seeing if the foot is ready to go," Hoiberg said. "So we'll see how he's feeling (Friday). Now it's about seeing how his foot responded to two pretty heavy workload days, and see if we can get him back on the floor."

Should McGowens return against Purdue, it will only be for short spurts as he regains his conditioning and feel.

But having McGowens in any capacity should strengthen Nebraska on both ends of the court, the Huskers having struggled mightily to slow down opposing guards with their top perimeter defender on the shelf.

"He does so many little things for this team; obviously first and foremost is his toughness on the perimeter on the defensive end," Hoiberg said. "And you've seen at times, players that have gone off (on Nebraska), and you just don't have that defensive stopper out there of Trey's quality."

Those perimeter players going off — North Carolina State's Dereon Seabron (39 points), Ohio State's Malaki branham (35 points) and Illinois' Trent Frazier (29 points), may be the difference between the Huskers having three more wins and sitting at 9-8 rather than at 6-11, 0-6 in the Big Ten, and losers in nine of their last 10 games.

"You win Ohio State, you win NC State, you find a way to win the other night (against Illinois), it's a completely different vibe with this team," Hoiberg said. "But we didn't, and that's the bottom line.

"I understand what this business is: you either win or you lose. It's not almost. So we've got to find a way to make those plays and get over the hump and get that much-needed confidence."

Four minutes, and a few comments, show the gap between Husker hoops and competing in the Big Ten

Balky shoulder sidelines Lakes again: Fifth-year senior Trevor Lakes is out indefinitely after reinjuring a right shoulder that has given him problems since he arrived at Nebraska.

Less than a year after undergoing surgery to repair the shoulder, and following that with a six-month recovery process, Lakes had a setback in recent weeks, Hoiberg said.

"He's really had issues with that shoulder. It's gone in and out of socket, I think it was four practices in the last couple weeks," Hoiberg said. "And he's had it happen a couple times in games, and it's really bothering him right now."

The 6-foot-8 forward had begun to carve out a larger role in Nebraska's return to Big Ten play, playing six minutes against Ohio State, 11 at Michigan State, and 17 at Rutgers.

It's unclear whether Lakes will pursue a medical redshirt, which would make him eligible for a sixth season of college basketball, or if this portion of his career will be over.

"Just to look at this thing and try to get him right, it's the right thing to do," Hoiberg said.

Photos: Nebraska has tall task in Illinois as it seeks first Big Ten win of season

Fred fights back: Husker coach defends himself after accountability questions

The Fred Hoiberg critics are loud. They’re outspoken. And as Nebraska fans learned this week, they can be found anywhere, including the Huskers’ locker room.

Kobe Webster stirred some controversy this week with comments he made during a radio interview regarding Nebraska basketball's leadership issues. He and Fred Hoiberg addressed that Friday.

The Nebraska veteran guard spoke about player accountability during an hourlong radio appearance, which led to a chat between player and coach.

The state's Division I women's basketball teams continue to outperform the men's teams in key rankings used by the NCAA tournament selection committees. Here are the latest NET rankings.

“I guess I was told officially the game would be moved to Thursday,” Wisconsin coach Greg Gard said on his postgame radio show Friday night.

Nebraska currently has fewer than seven scholarship players available, which is the Big Ten minimum for a team to play a game.

The Nebraska men's basketball team appears to have a little bit more time to recover from its COVID-19 issues than it originally thought.

Another week of Big Ten men's basketball is in the books, and The World-Herald's Jimmy Watkins has updated his conference power rankings.

Like last season, Nebraska men's basketball has found itself in another COVID pause. But that isn't stopping the healthy Huskers from continuing to work on their game while their teammates quarantine.

Nebraska's Trey McGowens watches the Illinois game from the bench on Tuesday as he continues to recover from a leg injury. McGowens has been cleared to return to team activities.

Nebraska’s Trey McGowens dunks in the second half against Western Illinois on Nov. 9 at Pinnacle Bank Arena.