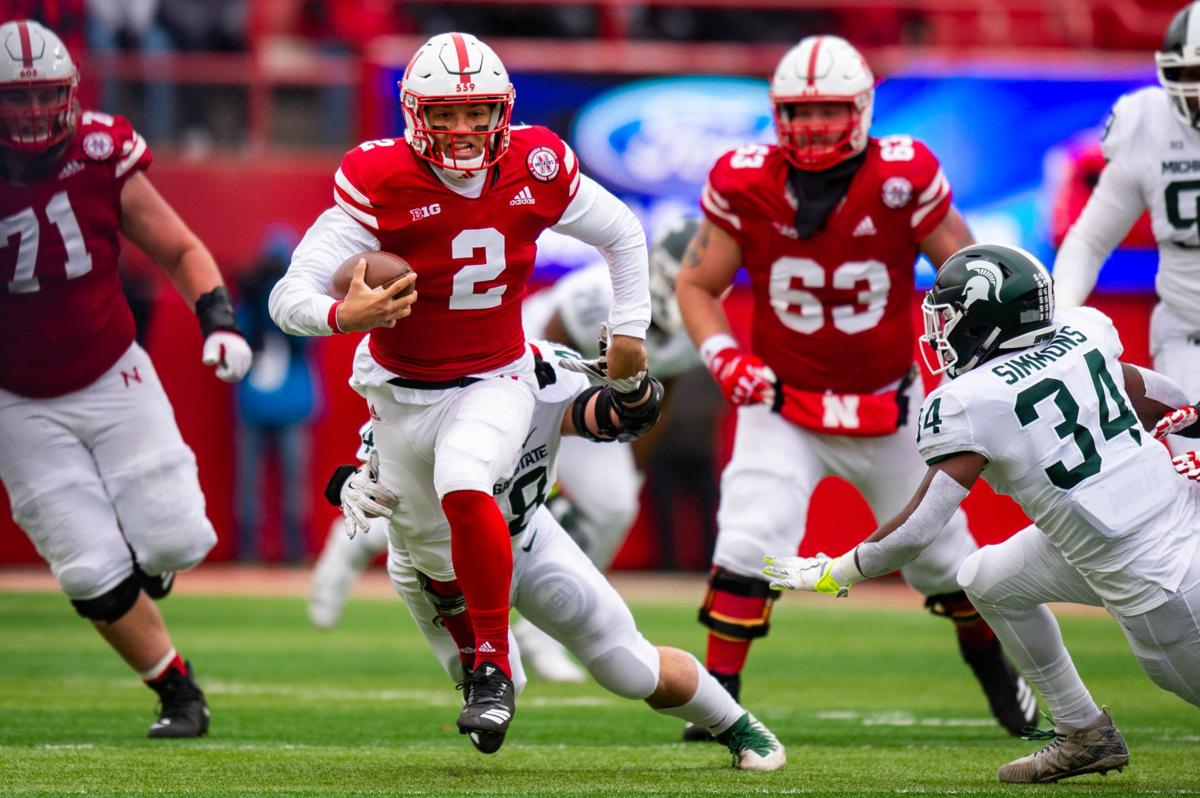 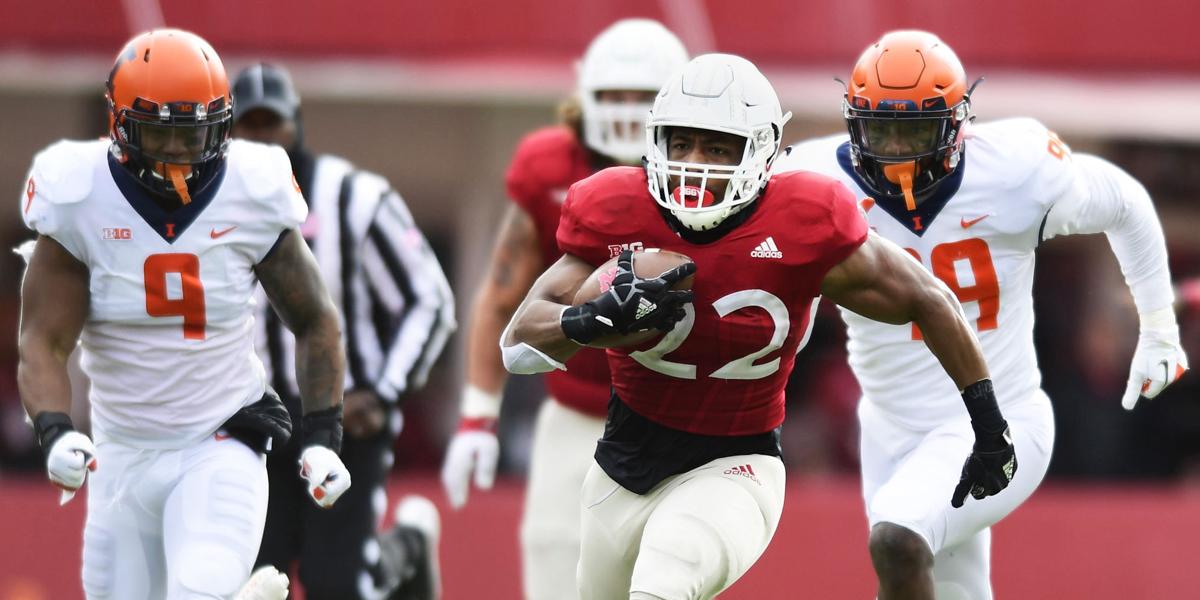 Nebraska running back Devine Ozigbo runs for a 66-yard touchdown against Illinois on Nov. 10, 2018, at Memorial Stadium. Ozigbo average 6.98 yards per carry in 2018.

In the midst of the most prolific single-game rushing output of his college career, Nebraska junior quarterback Adrian Martinez did not look like he was having a good time in the second half against Rutgers last December.

His Cornhuskers had seized control of a weird, cold, turnover-filled Friday night in New Jersey at the end of a weird season in large part because, to put it bluntly, they were running it down Rutgers’ throat and the Scarlet Knights had little in the way of recourse.

Martinez, whose early turnovers helped keep Rutgers in the game, ended up rushing for 157 of Nebraska’s 365 yards, the second-best single-game total of head coach Scott Frost’s tenure in Lincoln. He added two touchdowns, including a 41-yarder in the third quarter that doubled the Huskers’ longest scoring run of the season.

In between second-half series, though, Martinez would lay face down on the turf while athletic trainers stretched out his quads. He limped around. He kept playing, particularly because Luke McCaffrey made the trip and went through warmups, but then didn’t suit up for the game.

This spring, Martinez was asked if he could have played in a bowl game had the Huskers not voted against accepting a bid as a team.

"If it was a week later, who knows, I think I could've found a way to play, but I was pretty beat up from a season and then also from the (Rutgers game) — I wasn't in the best of shape," Martinez said. "But who knows?"

Martinez’s big day and the dynamic element he provided Nebraska that night helped the Huskers finish the shortened 2020 season second in the Big Ten in rushing both on a per-game (201.4 yards) and per-carry (4.82) basis.

It also put him in a position where he could have been too beat up to play the next week had NU opted to.

Fast forward seven months and Nebraska has a similar consideration on its hands as it steams toward the 2021 season. Martinez (6-2 and 212 pounds) has drawn rave reviews for his physical condition and his speed so far in camp. Nebraska also really needs to keep him healthy for 12 games (or more) considering it has two freshmen who have never appeared in a college game backing him up.

But Martinez being in great shape and looking like dynamite with the ball in his hands only makes it all the more tempting to call his number in the run game more frequently.

So, what’s a head coach to do?

“I’ve said publicly that I think we’ve run him a little bit too much,” Frost said recently. “That being said, I think there’s going to be ways where that’s the best play we can call is something that might involve him carrying the ball. We’ll try to limit those as much as we can to keep whatever quarterback is playing on the field.”

Nebraska has, by the numbers, been a good rushing team under Frost. The Huskers have finished in the top five in the Big Ten each of the past three seasons in both rushing yards per game and per attempt. Over the three seasons combined, they’re averaging 204.9 per game and 4.89 per carry.

Martinez has led Nebraska in carries each of the past two seasons, but his carry share of 27.25% in 2020 and 26.47% in 2019 both actually trail slightly his freshman year, when 140 rush attempts represented 30.17% of Nebraska’s overall carries.

It was way back then that Martinez said he’d be willing to carry the ball 40 times a game if that’s what the coaching staff asked of him. As quarterbacks coach Mario Verduzco is fond of saying, you can’t be “a candy ass” and play quarterback at Nebraska.

Martinez missed time in 2018 and 2019 with knee injuries, had shoulder surgery after the 2019 season and then found himself battered again in 2020 even though he was benched for most of two games and played as NU’s primary option in just six contests.

“I would say I look at it a little bit differently, but that mindset hasn’t changed,” Martinez said recently when asked if he considered altering his freshman-year approach at all. “If that’s what it takes to win the game, if that’s what it takes to beat Illinois Week 1, let’s do it. Let’s do it. But I know we have a pretty talented running back room and I feel confident that we’ll be able to evenly distribute the carries.”

There are several elements that make a running game effective, including, as offensive coordinator Matt Lubick pointed out last week, the ability to threaten defenses in the passing game, but no single element is likely to make as much difference as a dynamic running back.

NU had that in 2018 but has struggled to identify one since then.

The Husker running backs over the past three years have averaged 5.22 yards per carry, which is a productive number. However, after Devine Ozigbo (6.98) and Maurice Washington (5.91) combined to power a 6.36 yards per carry mark for the backs in 2018, NU’s running back corps has finished at 4.63 and 4.49, respectively, in the two years since. Part of the 2020 number is undoubtedly because Nebraska faced only conference competition.

There’s also the matter of self-inflicted problems like turnovers and drive-killing penalties.

“We did a lot of statistical analysis in the offseason and we were second in the league in rushing, second in the league in efficiency per play and near the bottom of the league in points per drive,” Frost said last week. “Some of that is that the defenses we played were really good and I give them a ton of credit. This is a good league with a lot of good coaches. But I think that discrepancy largely is just mistakes we made ourselves. Negative plays, turnovers, bad snaps, penalties.”

Meanwhile, with two dynamic playmakers at quarterback, Frost and company leaned hard on them. Martinez and McCaffrey accounted for 55% of the Huskers’ rushing yards and 46.7% of the team’s carries.

They also combined for half of NU’s 22 fumbles and seven of nine lost fumbles, which is part of the reason leaning heavily on quarterbacks in the run game has been a fine line for Nebraska. The other, of course, is injuries. At one point late in a win against Northwestern in 2019, Nebraska was trying to figure out who was “less hurt” between Noah Vedral and McCaffrey because Martinez was already out of commission. Nebraska has used at least two starters under center in each of Frost’s three seasons, though last year was performance-related rather than injury-driven.

The most obvious protection for Martinez this fall would be the emergence of a quality featured back from Nebraska’s stable of six scholarship options, whether that’s junior USC transfer Markese Stepp, a freshman like Gabe Ervin Jr. or Sevion Morrison or somebody else.

That’s because even if self-inflicted errors are, as Frost posits, the biggest inhibitor over the past two seasons, the data suggests that Husker running backs have been less effective, too.

In 2020, only four of NU’s 20 longest rushing plays came from running backs (two each from Mills and Wan’Dale Robinson, whom NU always called a receiver but essentially was relegated to running back duties much of the time in search of a dangerous backfield presence). Fifteen came from Martinez and McCaffrey, and then receiver Alante Brown chipped in the other. The longest scoring run of the season by a running back was a 12-yarder from reserve Rahmir Johnson against Iowa.

It is also eye-opening in light of data provided to the Journal Star by Adam McClintock of Matrix Analytical Solutions, which suggests the Huskers’ offensive line play has steadily improved from bad to slightly above average over the same period. The company measures a statistic called tackles for loss per rush attempt, which McClintock says correlates closely with rushing production. It measures, simply, the percentage of time that a rushing play is stuffed behind the line of scrimmage. NU was not good in 2017, Mike Riley’s final year (33.9 percentile among FBS schools) and has steadily improved since. The Husker offensive line finished 39.6 percentile in 2018, 45 percentile in 2019 and 60.4 percentile last year.

One interpretation: Running backs the past two seasons have struggled to turn modest gains into explosive plays once they reach the second level, something both Ozigbo and Washington excelled at in 2018.

That’s not to put all of the blame on Held’s group. NU faced only Big Ten teams in 2020, including three of the stingiest in the country against the run in Ohio State, Northwestern and Iowa. Defenses didn’t respect Nebraska’s passing game enough last year and subsequently felt comfortable dedicating more defenders to the box. Mills missed nearly three games with an injury and wasn’t really back to full speed until the final week of the season. Behind him, NU had nothing but inexperienced players.

As the 2021 season progresses, being near the top of the Big Ten in rushing again is a reachable goal for Nebraska, but the Huskers cannot afford for it to come at the cost of Martinez’s health. They likely cannot keep Martinez healthy and be efficient on the ground without both the emergence of a dynamic back and also a more dangerous passing game.

A rebalancing, then, rather than a rebuild, is in order.

Photos: Huskers hit the field Wednesday morning for practice No. 5

Some Husker fans get sneak peek at alternate football uniforms

Nebraska plans to wear the patriotic-themed uniforms when it hosts Buffalo on Sept. 11. The Huskers will reveal the uniforms to the world Aug. 31.

Scott Frost said the Huskers have six WR rotation spots. Matt Lubick says NU can go three deep. So, who's in? Who's close? Who's got work to do?

With the New Orleans Saints in need of a kicker, former Husker Brett Maher will get his chance to be the guy after he made the team following a tryout Monday.

History shows Husker backup QBs must get up to speed quickly

Nebraska would prefer its backup QBs only play at the tail end of blowout wins. But history shows they'll be needed more than that, putting pressure on the Huskers' young passers to get ready for action.

McKewon: The Husker bubble believes as the outside world shrugs

Right now, Adrian Martinez is healthy, Nebraska’s hungry and the program Scott Frost wanted is present in training camp. But the outside world — including Husker fans — continues to be skeptical.

Nebraska running back Devine Ozigbo runs for a 66-yard touchdown against Illinois on Nov. 10, 2018, at Memorial Stadium. Ozigbo average 6.98 yards per carry in 2018.