Subscribe
Share This
After Huskers WRs had their 'butts whupped' by DBs, Mickey Joseph searches for leader, consistency
0 Comments
Share this
GET EXCLUSIVE TEXTS!
Sign up for breaking news and analysis from our Huskers experts
1 of 2 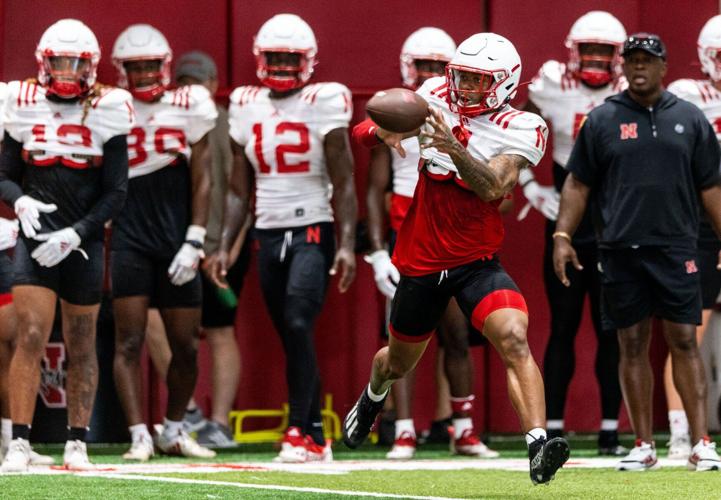 Nebraska's Alante Brown catches a pass during practice at the Hawks Center on Monday. 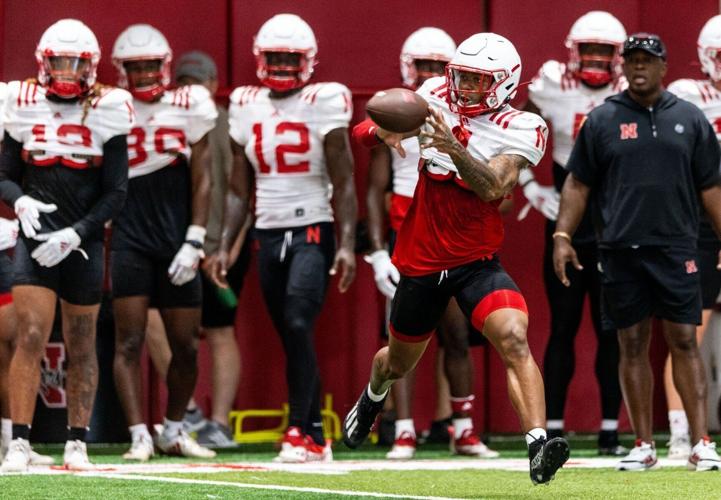 Mickey Joseph scanned his eyes around, looking for a leader to rally the wideouts.

Nebraska’s receivers coach wanted someone to say something — anything — after the Husker wideouts “got our butts whupped” and “took it on the chin” from the defensive backs during Monday’s practice.

But in searching for “that alpha,” Joseph only found himself.

“Nobody stepped up and said anything,” Joseph said. “That’s my problem with them right now is that when things are going bad, somebody’s gotta just call the group in and say, ‘OK, hey, let’s settle down and get it going,’ because I’m not going to be out there with them.”

Red Report: Who is Nebraska's No. 2 TE? Sean Beckton has a few ideas

Of the 16 receivers in camp, only two of them are seniors with playing experience at Nebraska: Omar Manning and Oliver Martin.

Most of the other upperclassmen are incoming transfers, like Trey Palmer out of LSU, Isaiah Garcia-Castaneda (New Mexico State) and Marcus Washington (Texas).

Joseph offered to leave the room in an attempt to inspire a players-only meeting for them to hash things out.

“I’d rather them do it,” Joseph said. “They’re gonna learn. They know what to expect. But they know one thing: I’m gonna be hard on them. I’m not gonna look away and act like I don’t see it.”

The tough-love, say-it-like-it-is mentality from Joseph comes from his desire to help his players achieve their sky-high expectations.

Considering Joseph has coached NFL stars like Ja’Marr Chase and Justin Jefferson, Nebraska’s players understand where the former Husker quarterback is coming from.

Joseph isn’t just looking for a leader in the room. He’s looking for the cream to rise to the top, too.

Joseph said Nebraska will play with a rotation of six receivers in 2022.

To crack the rotation, Joseph says the ones who can balance playmaking and consistency will get the edge.

“You can be consistent, but you’re not making plays? I look at all of that,” Joseph said.

That position battle will continue into the week ahead of the Northwestern game, Joseph said.

As a whole, Joseph said the “group’s been pretty solid,” outside of Monday’s practice.

He then mentioned Palmer, saying “I’m really happy where Trey’s at” and then said the same regarding Martin. The fourth receiver Joseph mentioned was Washington, saying that he’s “really doing a really good job.”

The fifth player mentioned was Garcia-Castaneda, who is coming in a tad behind everyone else due to the injury that held him out in the spring.

“He’s getting better every day,” Joseph said. “Like, I gotta be patient with Isaiah first of all because he didn’t go through spring. The last time he really played football was what, November, December? So I gotta be patient with him, but so far, he’s been coming along. He shows flashes. Now we just gotta get him back in routine, get him back playing football again.”

Whether it’s finding that leader or finding the top six to play on game day, Joseph believes those strides will be made soon.

In fact, he’s confident in that.

“Tomorrow, they’re going to come back and be ready to go,” Joseph said. “One thing about this group, once I challenge them, they always come back.”

Photos: Check out sights from a Husker football practice

Amie Just: The severity of Husker QB's Thompson's thumb injury, and why surgery was 'definitely needed'

"I basically tore and strained all the ligaments and muscles and everything in my hand," says Thompson, who says offseason surgery made him feel normal again.

It’s been over a decade since Nebraska landed a five-star recruit, but that could change in a matter of weeks. That's one note from Luke Mullin.

McKewon: O-line is key, but it's not Donovan Raiola's job to fix Nebraska's offense

The rain had stopped by the time the team went outside, but the mist in the air and the wet grass offered an opportunity to rehearse in the elements.

Nebraska will fly all 110 of its training camp participants to Ireland. That means hard choices for playing time — none tougher than the one Scott Frost and Bryan Applewhite face with running backs.

Nebraska’s fall camp moved into Memorial Stadium on Wednesday, where reporters were able to observe a portion of the open practice.

To preview the 2022 Nebraska football season, we're breaking down the entire Husker roster with a closer look at each position and every player. Here we highlight the offense.

Devin Drew, in camp just one week, has put himself in the mix for playing time. The Nebraska D-lineman hasn’t made the kind of “blowups” one might expect from a player who arrived in mid-August.

An offseason question mark — Nebraska's defensive line — is now potential exclamation point on the Huskers' defense. Sam McKewon takes a look at how it happened.

Red Report: Decoldest Crawford out with knee injury, but Frost says WRs are still ‘deeper than ever’

Nebraska's Alante Brown catches a pass during practice at the Hawks Center on Monday.