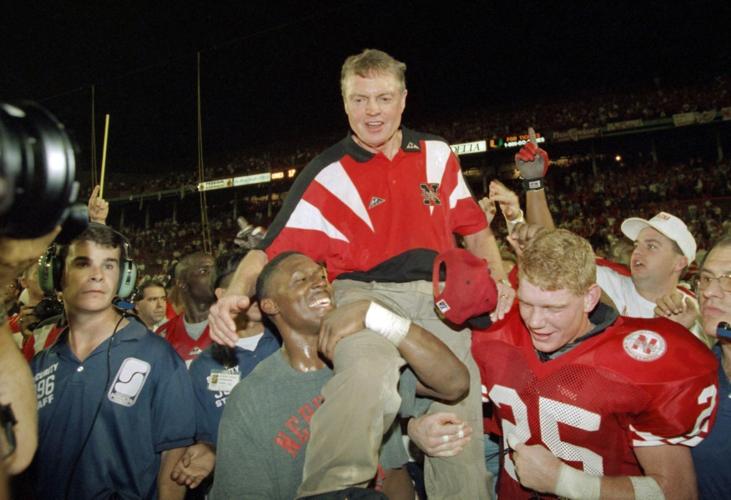 Former Nebraska football coach Tom Osborne is carried off the field after the Huskers defeated Miami in the Orange Bowl in 1995 to claim the national title. 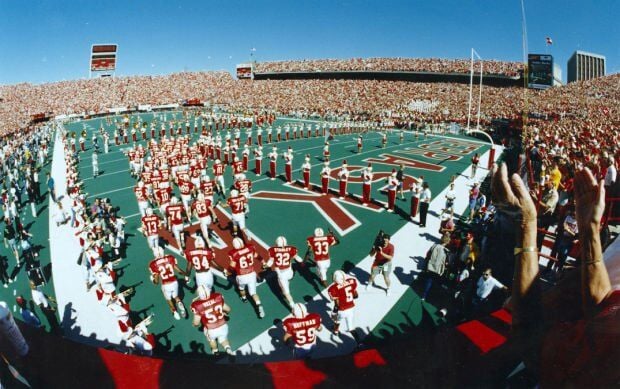 The Huskers come onto the field before the game against UCLA on Sept. 17, 1994. 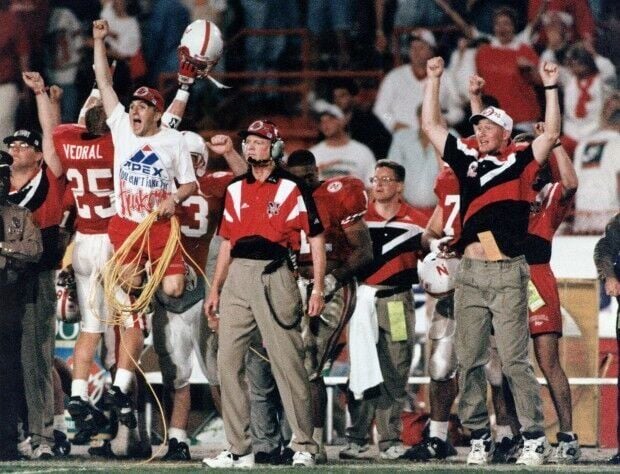 The former Husker running back, who is still the school's and Big 12's all-time leader in career kickoff return yards, is the son of Nebraska great Tony Davis. His ties to the program are strong.

That's why it was important for Davis to be involved with perhaps the most comprehensive documentary of Nebraska football during Tom Osborne's tenure from the early 1970s through the program's glory years of the mid-1990s.

Letter from the editor: A bright future, a fond farewell

Davis recently participated in a Q&A with the Journal Star to talk about the project. The first of the two-movie series, "Day By Day: The Rise," will premiere at 7:30 p.m. May 12 at The Rococo in downtown Lincoln. For more information on the project, visit daybydaymovie.com.

Lincoln Journal Star: What are your feelings as the debut of this project draws closer?

Josh Davis: It's great, it's exciting. There's a lot of hard work put into it. It's been over three years. We got kind of slowed down during the COVID year, and had some different ways that we pivoted in wanting to show it.

But it's an unbelievable story on Coach Osborne's run, who I still say, and many people say is the greatest coach in the history of college football. His first year as the head coach was my dad's first year as a starter in 1973, so it really covers his time from when he took over from Devaney all the way to the national championship game against Miami, is our first movie.

And then the second film will be released later. It's going to be right after that Miami game and the first national championship all the way through his last game against Tennessee.

It's just going to dive deep into a lot of areas where, while they were making their run, stuff behind the scenes that I'm sure a lot of fans don't have any clue about. But it really shows how Coach Osborne and even the team navigated through all that adversity, and started winning championships, where it would break most teams and most people, and tear them apart. Those guys stayed together, and it's just an incredible story.

LJS: As a former player, and a legacy player at NU, what was this project like for you?

JD: For me, it kind of came full circle for me in my life, just being younger as a Husker fan. Me and my brothers and sister used to run around that place when my dad was a GA there in the 80s, so we got to watch the teams that were around there — the Broderick Thomas, Steve Taylor teams that I used to love to watch.

All the way to growing up there, and then playing there, and now making a film on Coach Osborne. It's really surreal.

Steven M. Sipple: Feeling forever blessed to have been part of the Journal Star team

I got to partner up too with a guy that's a former Nebraska player and a legacy player in Mark Brungardt. His dad Tim and his uncle Paul both played at Nebraska. So it was really interesting for us. Like I said, it kind of feels like your life came full circle when you make a film like that.

LJS: How did you get involved with this project?

JD: Myself and Justin LePera, who's the director, and Mark Brungardt were kind of kicking around ideas of why they haven't made a Nebraska "30 for 30"-style film, when they had such a strong run. And you saw some of these other teams that they were promoting on there — the Miamis, the Oklahomas, so forth. And Justin asked, 'Hey, you think we could make something like this?' And kind of asked what it entailed, and told us what it entailed as far as resources-wise with finances and interviews lined up and so forth.

And we made a plan, and I think from that day back in late 2018 until even today, we probably talk about this film daily, so it's been a lot of work.

LJS: Can you describe the amount of work that went into this?

JD: I don't think you really know how much work goes into it. When we first got started, I didn't think it was going to be too difficult. I still don't think it's too difficult, you've just got to take the time to do it. It's like any other job, right? So if you want it to be good, you've got to spend the time into it. And I think we did that real well, and we're still doing that to this day.

It's an abundance of work, but we've got a great team that's worked really hard, and we all want to do things at an elite level and want this to be a great thing for the fans, and the former alumni, and the coaching staff; but also just an educational piece for fans and younger kids that don't have a clue about those championship years.

I think even when I was younger; I went to school there from 99 to 2003, when they talked about the 1970-71 teams, you didn't have a whole lot of background and history on it unless you really did your homework.

So in doing this film, it gave me a good history as far as learning that. And I think it could be great for young kids growing up that don't know much about Nebraska, and it's been some down years, and they're working hard to turn it around.

I think it's just going to give more education on that, and I think it's going to be a great thing for Nebraska, for the fan base, and even for future recruiting.

LJS: Any moments that stand out to you during the making of the film?

JD: All the interviews, I thought, were good. I think some of the more memorable interviews that I witnessed, or I was privy to seeing after the fact on film, was how emotional the guys got talking about the loss at Florida State.

You're going to lose some big-time games, but you can tell how it still affects them even to this day, because they were that close and they put so much time, effort, and it's your everyday job. And they didn't want to let down Coach Osborne or their other teammates.

You could see how it still affected them when we interviewed them.

Obviously to this day those guys still feel those incidents, and it's powerful.

LJS: What kind of feedback have you gotten from people who have been involved with the project?

JD: We're kind of our own biggest critics. So the guys that have watched it, and looked over it — we have countless discussions about how this could look better, or ways that we could tailor it while still telling the facts. Just the best delivery we could possibly get.

Because for us, hey, you've got one shot at making this thing. It's going to be probably the biggest thing Nebraska's had on film as far as talking about previous years under Coach Osborne's run, so you want to make sure it's a great product.

We're all high-level with what we do in life and what we want to achieve, and we just wanted to put our heart and soul in this, and make sure the former alumni are the most proud of this, including Coach Osborne. That's why we kind of set out to do this.

LJS: Was the biggest challenge in making this making sure it met your own standards?

JD: I think it's part of that, but also that we didn't want to let the guys down that gave the interviews. I think the biggest — the self-reflection on the film, and the discussions, was making sure that hey, these guys gave us their all in the interviews, let's make sure that we deliver so that it's a great product, and it's a great representation of them and their character.

At the end of the day, what we want to do is just make a product that the guys that gave the interviews, our alumni, would be really proud of. And that's the hard work that goes into that. That's the keeping you up at night, making sure it's being delivered the right way.

Shatel: Nebraska football documentary is as direct and raw as the '90s teams

The first installment of the docuseries “Day By Day: The Rise” is as direct and raw as those teams, writes Tom Shatel. In that sense, it serves that unforgettable Husker era well.

Just before Nebraska football is set to host a key defensive line transfer from Alabama, it extended a scholarship offer one of top remaining junior college defensive linemen — Taylor Lewis.

Maybe you’re not quite ready for the offseason Husker hype train. But it’s coming. It started Sunday with the commit of Alabama defensive back transfer Kaine Williams.

The good old days were back in downtown Lincoln for the premiere of the documentary. "It was a story that deserved to be told," said one former player.

A busy two months of recruiting visits begin this weekend for Nebraska football with one big question. Will a pair of former Alabama defenders become Huskers?

As NCAA works to eliminate collectives' involvement in recruiting, NU believes it has nothing to worry about

The three-page document landed in email inboxes around the country early last week. For the first time in more than 10 months, the NCAA was officially weighing in on the most confusing topic in college sports.

The Nebraska football team's first set of visitors this weekend has already resulted in a commitment.

Nebraska left tackle Teddy Prochazka "heard the pop" of his left knee last October. The rehab from a torn ACL, MCL and meniscus has been intense — and painful.

What's it like to plan a trip to Ireland for the Husker football team? NU's Sims details the process

From equipment to medicine to hotel plans, NU director of football operations Andrew Sims describes the meticulous plan for Nebraska's trip to Dublin.

One of the state's top 2024 football prospects, Carter Nelson, got a scholarship offer from Nebraska on Wednesday.

Former Nebraska football coach Tom Osborne is carried off the field after the Huskers defeated Miami in the Orange Bowl in 1995 to claim the national title.

The Huskers come onto the field before the game against UCLA on Sept. 17, 1994.