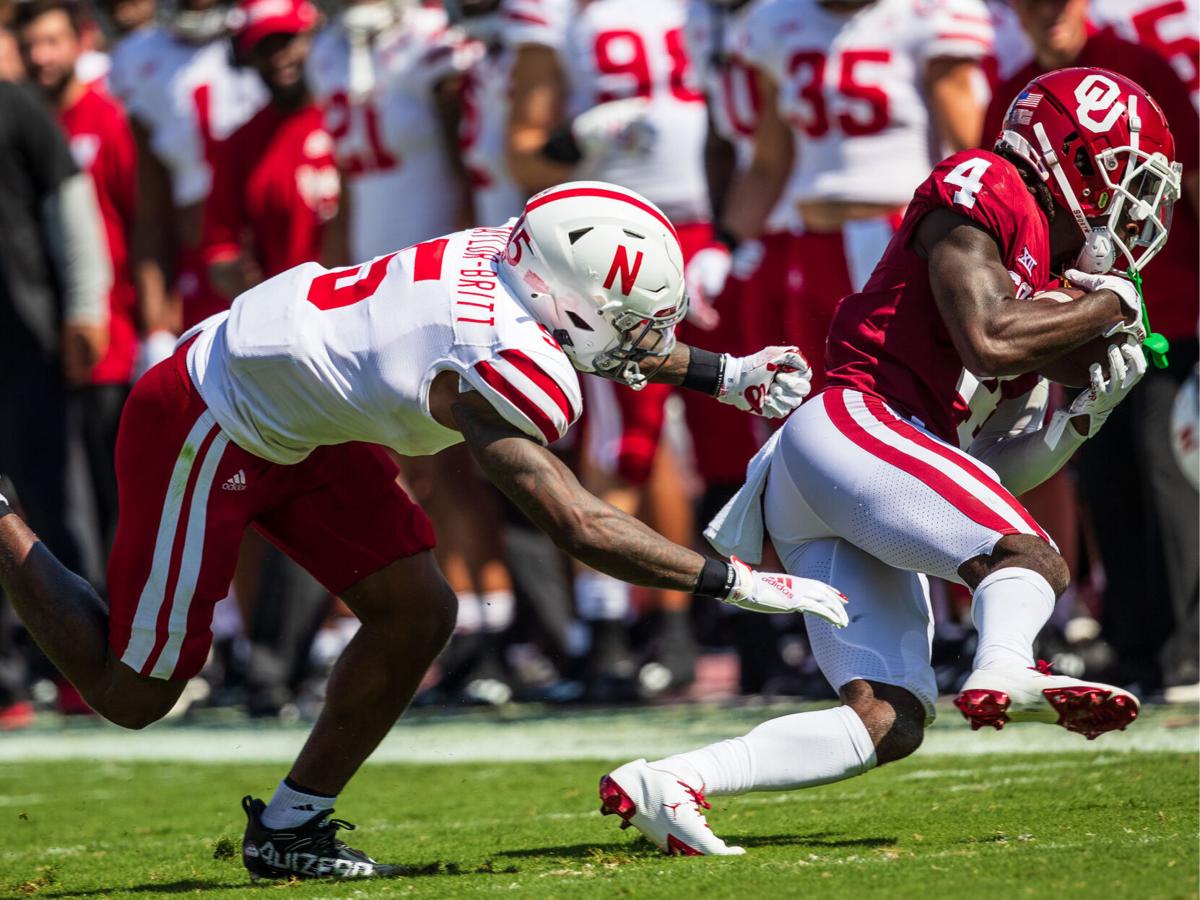 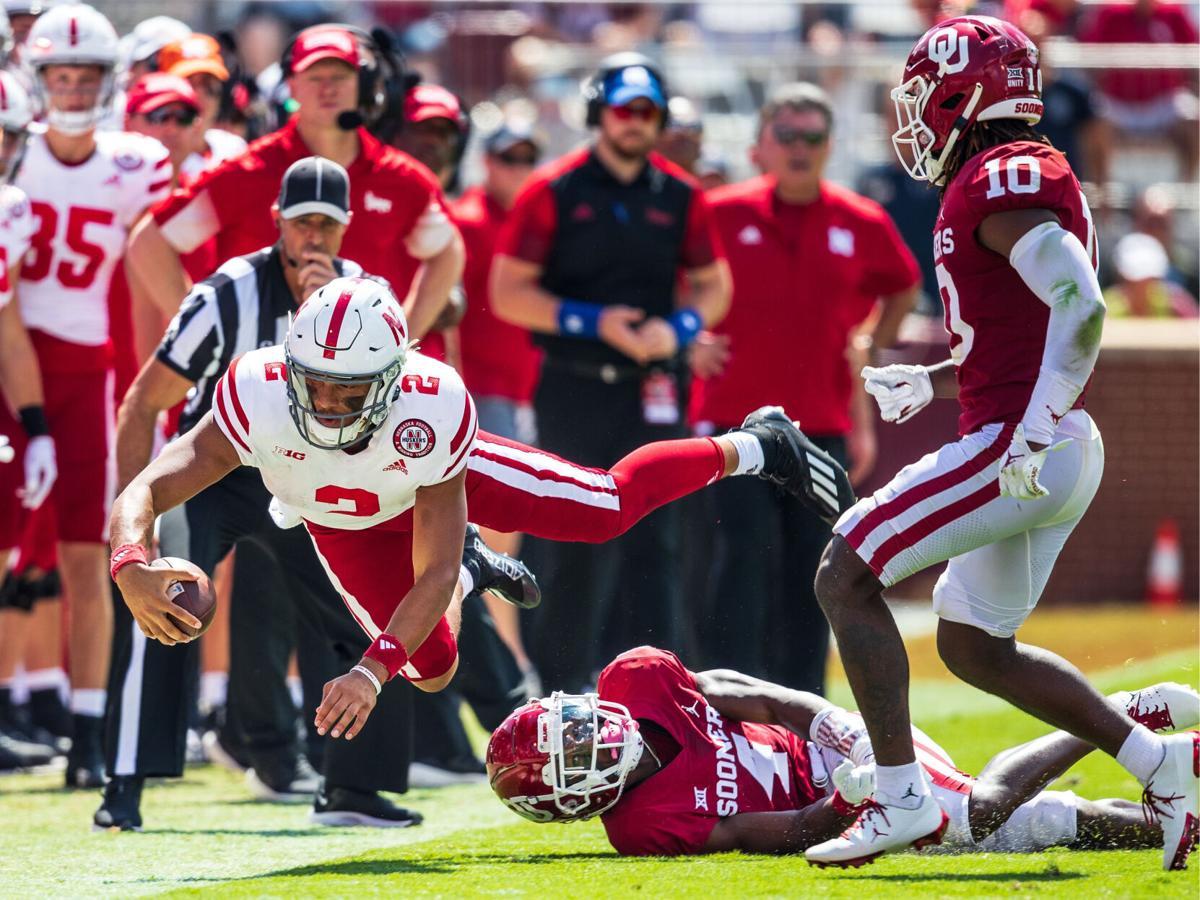 Adrian Martinez dives for a first down against Oklahoma.

NORMAN, Okla. — Nebraska slowed down one of the nation’s top-scoring teams, and quarterback Adrian Martinez engineered multiple lengthy drives, but special teams gaffes and repeated penalties on the offensive line piled up as No. 3 Oklahoma pulled away late for a 23-16 win Saturday.

The Huskers had multiple chances to spring an upset before ultimately falling to a top-25 team for a 14th straight game. They trailed just 7-3 at halftime and moved the ball inside the Oklahoma 20-yard line out of intermission. But the drive didn’t produce points and the visitors never got closer than a touchdown the rest of the way.

His statistics weren’t gaudy, but Martinez played one of the better games of his career while finding open receivers and scrambling when necessary. His lone turnover — an interception in the red zone in the fourth quarter — was a desperation heave on fourth-and-17 with NU needing a touchdown. The fourth-year starter completed 19 of 25 passes for 289 yards and a touchdown.

The defense, meanwhile, foiled the Sooners on four straight possessions after an opening touchdown march. It didn’t force any turnovers but still held OU to its lowest point total in five years and 68 games. Outside linebacker JoJo Domann made a team-high 12 tackles while the secondary shined against strong-armed OU QB Spencer Rattler, who finished 24-of-34 passing for 214 yards and one touchdown.

What-ifs peppered Nebraska’s defense on the opening drive of the game as Oklahoma used 14 plays and nearly seven minutes of clock to go 75 yards for a touchdown. The Sooners converted third downs of 11 and seven yards on pass plays while avoiding a near interception by inside linebacker Luke Reimer on an incompletion. Rattler plunged across the goal line for a 1-yard sneak as one of the nation’s highest-scoring attacks took an early lead.

The Huskers answered with a 14-play drive of their own that resulted in points despite 30 yards of penalties — three false starts and a personal foul — spread across four offensive linemen. Martinez found Omar Manning over the middle of the field for 31 yards on third-and-12. A six-yard completion to stumbling tight end Austin Allen on fourth-and-4 went for six yards. Running back Rahmir Johnson reeled in an eight-yard catch along the sideline on third-and-6 later on.

Kicker Connor Culp — who missed all three of his attempts last weekend — then connected for a 51-yard field goal.

A defensive struggle more reminiscent of a Big Ten showdown broke out for the rest of the half. The teams exchanged punts, then Oklahoma missed wide on a 54-yard field-goal try following five straight runs and an incompletion. A 20-yard jumping catch by Levi Falck — who took a vicious hit on the way down — highlighted NU’s next drive that stalled from there and ended with Culp grazing the right upright in a miss from 50 yards.

The Blackshirts held again from there, with an OU facemask call on Rattler effectively squashing the possession. After a punt that set up Nebraska on its own 4-yard line, the visitors converted third downs from 12 and five yards before a Martinez sack sent the ball back to the Sooners. OU drove to midfield before the halftime horn.

Nebraska’s considerable momentum began to evaporate in the midday sun after intermission. A promising and creative drive ended in Culp pulling a 35-yard attempt wide left.

Then the Sooners took off. A flea flicker from Rattler to Marcus Mims netted 23 yards early in a 10-play, 80-yard march that ended when Rattler hit a wide-open Jeremiah Hall on a run fake from the Nebraska 1.

Big Red overcame two O-line penalties and a knee injury to running back Gabe Ervin after that, completing a 75-yard trek when Martinez found the end zone on a four-yard keeper. But the Sooners blocked the extra-point try thanks to a strong push up front and Patrick Fields returned it for two points. It essentially reduced NU’s touchdown to a four-pointer and put Oklahoma ahead 16-9 entering the fourth quarter.

The Blackshirts couldn’t hold OU yet again, this time on 12 plays spanning 65 yards that included two more third-down conversions. Kennedy Brooks finished with a 2-yard rush to push the lead to 23-9.

Nebraska, again, moved the ball but fizzled when it mattered. Martinez connected with Zavier Betts down the sideline for 55 yards and the Huskers reached the OU 17 before a sack set up a fourth-down desperation try that D.J. Graham corralled for a one-handed interception.

The defense then forced a three-and-out though. Then Martinez again moved his squad down the field and found Omar Manning for a 21-yard touchdown and a one-possession game at 23-16 with under six minutes left.

OU chewed some clock before NU got one last shot from its 17 with 57 seconds left. The Huskers managed just four plays — including two Sooner sacks — to end the game.​

Photos: Nebraska vs. Oklahoma in 50th anniversary of Game of the Century

Nebraska fans gather ahead of Huskers' showdown with Oklahoma.

The Nebraska Alumni Association held an event in Oklahoma City on the eve of the Huskers' game against Oklahoma.

Adrian Martinez dives for a first down against Oklahoma.