Subscribe
Share This
Lyell Bremser’s call of Johnny Rodgers' punt return lives on as ‘national anthem’ of Husker football
0 Comments
Share this
GET EXCLUSIVE TEXTS!
Sign up for breaking news and analysis from our Huskers experts 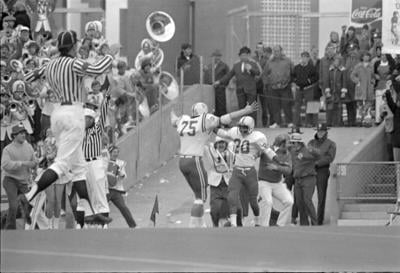 LINCOLN — Jack Payne sat a little back and to the right. Dave Blackwell sat to Payne’s left, next to Lyell Bremser. On the far left was a spotter — Bremser’s son-in-law.

And there was Bremser, “Mr. Football,” the star of KFAB’s crew at Owen Field. It was the best seat in the house for the best voice in the state, a man who was soon to make the best call of his 45-year career broadcasting Husker football in the Game of the Century, Nebraska-Oklahoma.

“We were really juiced up — we were ready to go,” Payne recalled in a World-Herald interview three years ago.

Shatel: Johnny Rodgers and 'goosebump moments' from the Game of the Century

You can hear it in Bremser’s voice as OU’s Joe Wylie punted to Johnny Rodgers 4½ minutes into the classic. The call, now heard millions of times on radio, TV and YouTube, opens Huskers hearts all the way up.

Bremser then paused — for 12 seconds — to let an overflowing crowd have its say. That electric roar is part of the call. Rodgers hugged three teammates, including quarterback Jerry Tagge, before Bremser returned with the two lines that define that game, Rodgers’ career and Bremser’s legacy.

“Holy moly! Man, woman and child, did that put ’em in the aisles! Johnny ‘The Jet’ Rodgers just tore ’em loose from their shoes!”

Kent Pavelka — who worked next to Bremser for the last 10 years of Bremser’s career then took over for him at KFAB in 1984 — didn’t hear the call live in 1971. He was living in Fremont, still three years from KFAB, watching the game with his parents on a small black-and-white TV. He first heard it after the fact — and many times since.

“It gets played at the stadium all the time, it gets played on the radio all the time, people have it on their phones now,” Pavelka said. It’s on YouTube, too, where HuskerTapes.com has preserved many of Bremser’s calls. “It lives in perpetuity. Relatively speaking, very few people, walking around alive today, actually heard it on the air. But, because it’s such a brilliant call and it captured so much about Nebraska football, it’s become the national anthem of the program, in a way.

“Other than naming the players and coaches, what epitomizes Nebraska football? The fight song — and that call. It was perfect then, and it’s perfect now.”

So much so that it’s easy to forget Bremser wasn’t the only NU broadcaster calling the game that day. Until KFAB won exclusive rights to the broadcast in the 1980s, multiple stations would pack into the press box. Pavelka grew up in Lincoln listening to Bob Zenner (KLIN) and Dick Perry (KFOR).

Chatelain: Nebraska's hatred of Oklahoma pushed the Huskers to greatness

“Because of the KFAB signal, Lyell had so many listeners that those other guys didn’t have, and he had the legacy,” Pavelka said. “There’s no question about it.”

Bremser was also vice president and general manager at the station, so when Pavelka started working the broadcasts in 1974, he saw the respect and admiration for Bremser that KFAB staff had. Maybe, too, they were a little intimidated.

Game days were intense. Bremser was exacting and wanted the same from his partners; in football, Pavelka said, it’s too hard to see every single thing on the field, so spotters and analysts are crucial in helping paint the picture around the main call. Immediately after Bremser’s call of Rodgers’ return, for example, he kicked it to Blackwell, who mentioned Joe Blahak’s famous, questionable block as key in Rodgers’ return. Payne then chimed in to mention oranges landing on the field.

Pavelka joked that he got a few elbows in the ribs over his 10 years as Bremser’s right-hand man, when Bremser called a crucial decade of games full of growth and change for coach Tom Osborne.

“He demanded a great broadcast — and we had one,” Pavelka said.

McKewon: Great plays or gut-punch mistakes. Which Adrian Martinez will we get against Oklahoma?

Because KFAB did not call bowl games at the time, Bremser’s final call, Pavelka said, would have been Nebraska’s win over Oklahoma in 1983. Bremser had already told Pavelka after the Kickoff Classic blowout of Penn State, that he was retiring after the ’83 season. His decision was largely a secret, and he didn’t officially announce it until Feb. 15, 1984.

“It’s probably going to be like a death in the family,” Bremser told The World-Herald that day. “When you’ve been married to something for 45 years, it’s going to have a little effect.”

He remained as KFAB’s vice president and general manager a few more years before moving to Arizona, where he died in 1990. Pavelka, who had been calling Husker hoops for a decade when he took over football, recalled getting a call from Bremser after his first game in 1984. Bremser said he did a “great job.”

The legend never looked over Pavelka’s shoulder or loomed around the press box.

“He never stepped foot in the place again,” Pavelka said.

Pavelka isn’t sure just when Bremser first spoke the “man, woman and child” line, but he figures the words came out naturally.

It’s one that Nebraska’s most famous broadcaster, against whom all others are measured, used again during the Game of the Century just after NU running back Jeff Kinney — “at the top of the I,” as Bremser liked to say — scored the winning touchdown.

“Oh, man, woman and child, I never thought I would live this long to see this kind of a football game!”

Photos: Nebraska vs. Oklahoma in The Game of the Century 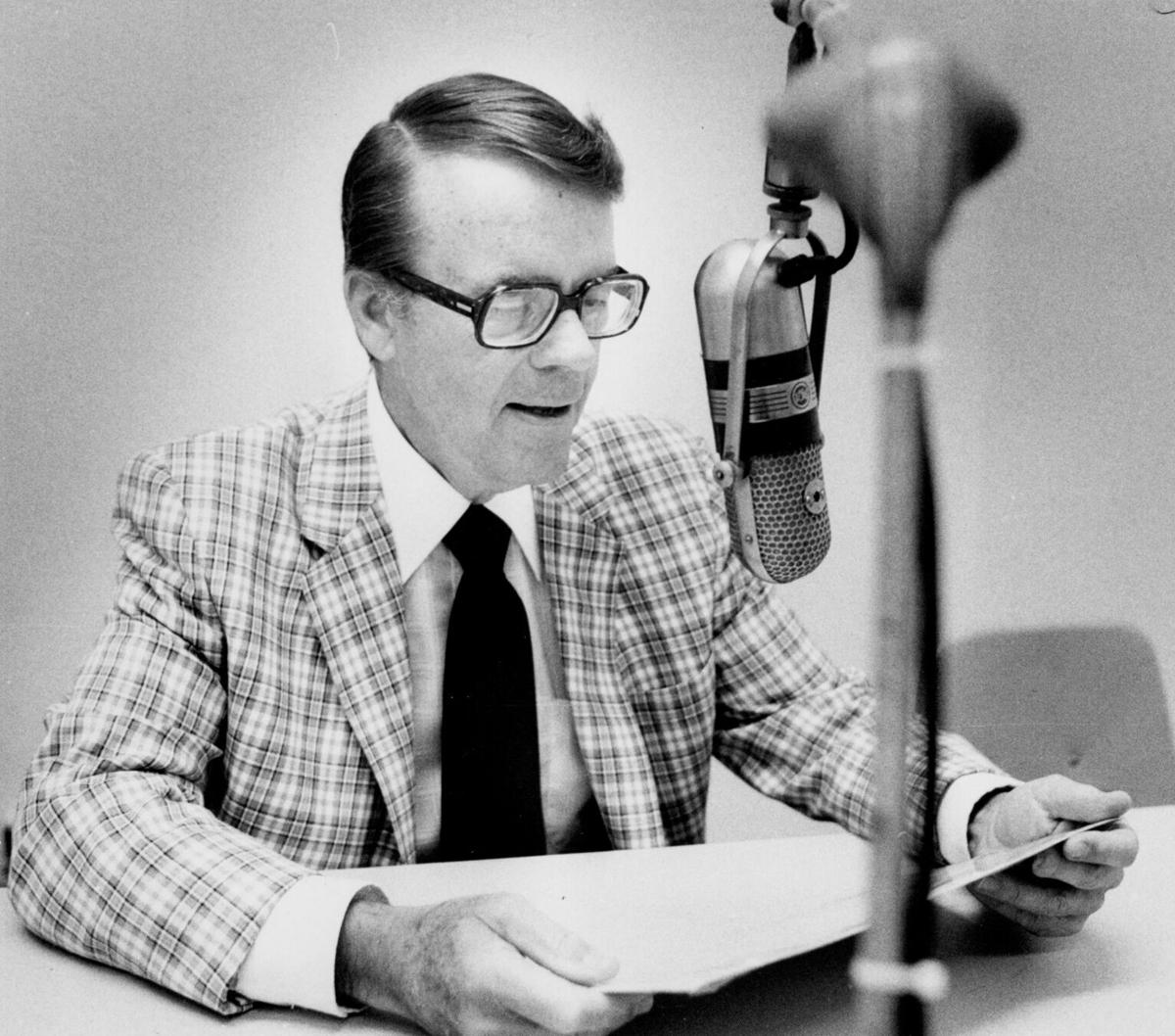 Lyell Bremser, the star of KFAB's crew, had the best seat in the house at Owen Field for the Game of the Century. 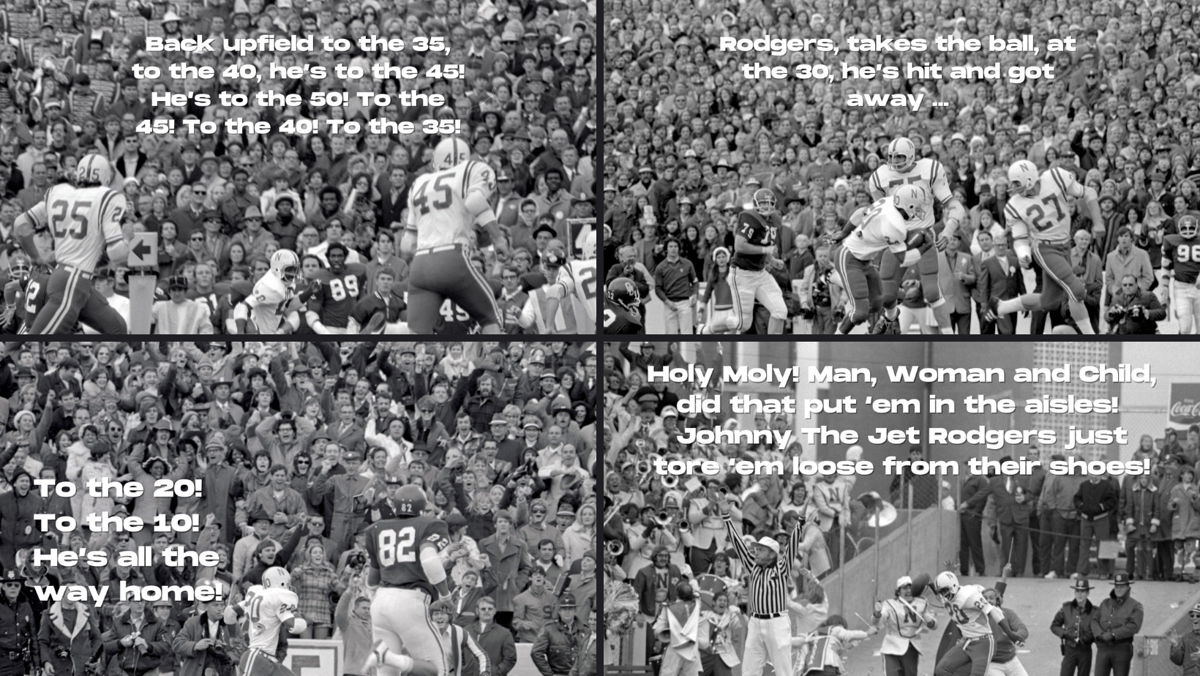 Detailed. Exciting. Folksy. Kent Pavelka didn’t hear Lyell Bremser's call live in 1971. He first heard it after the fact — and many times since. “It gets played at the stadium all the time, it gets played on the radio all the time, people have it on their phones now,” Pavelka said. “It lives in perpetuity. ... Other than naming the players and coaches, what epitomizes Nebraska football? The fight song — and that call. It was perfect then, and it’s perfect now.”