Subscribe
Share This
Steven M. Sipple: As Joseph stocks WR cupboard, Whipple's time in AFC North feels pertinent
0 Comments
Share this
GET EXCLUSIVE TEXTS!
Sign up for breaking news and analysis from our Huskers experts
1 of 2 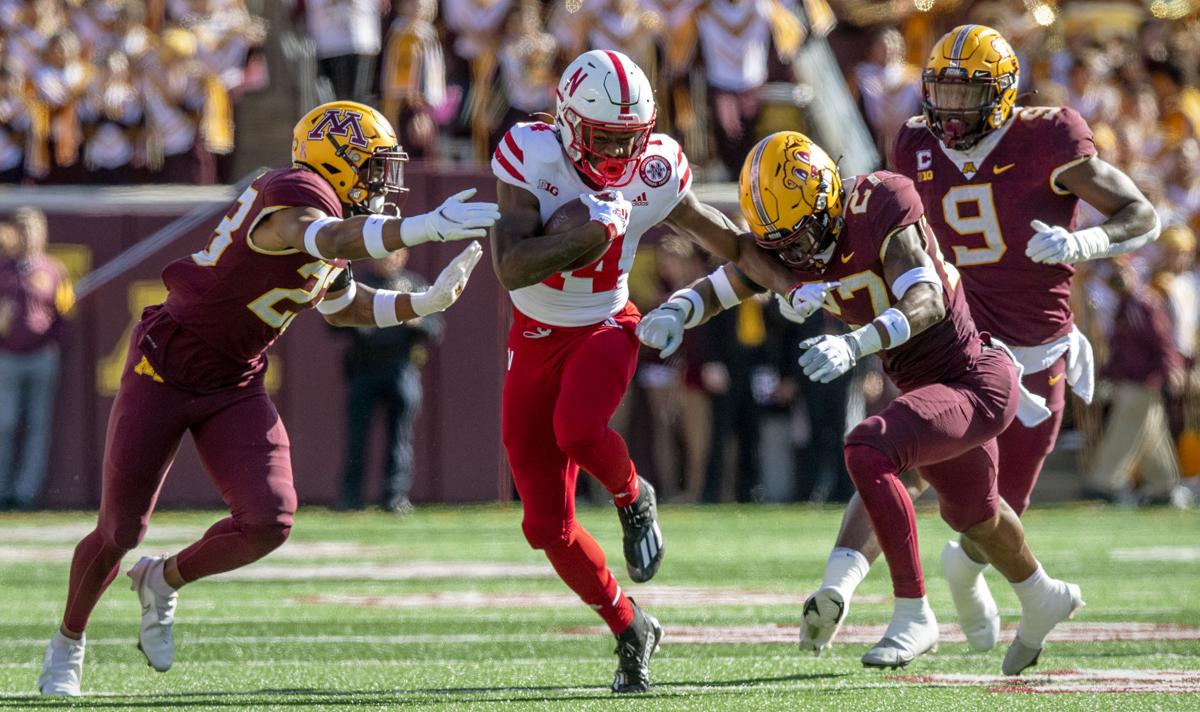 Nebraska running back Rahmir Johnson carries the ball on Oct. 16, 2021, in Minneapolis. 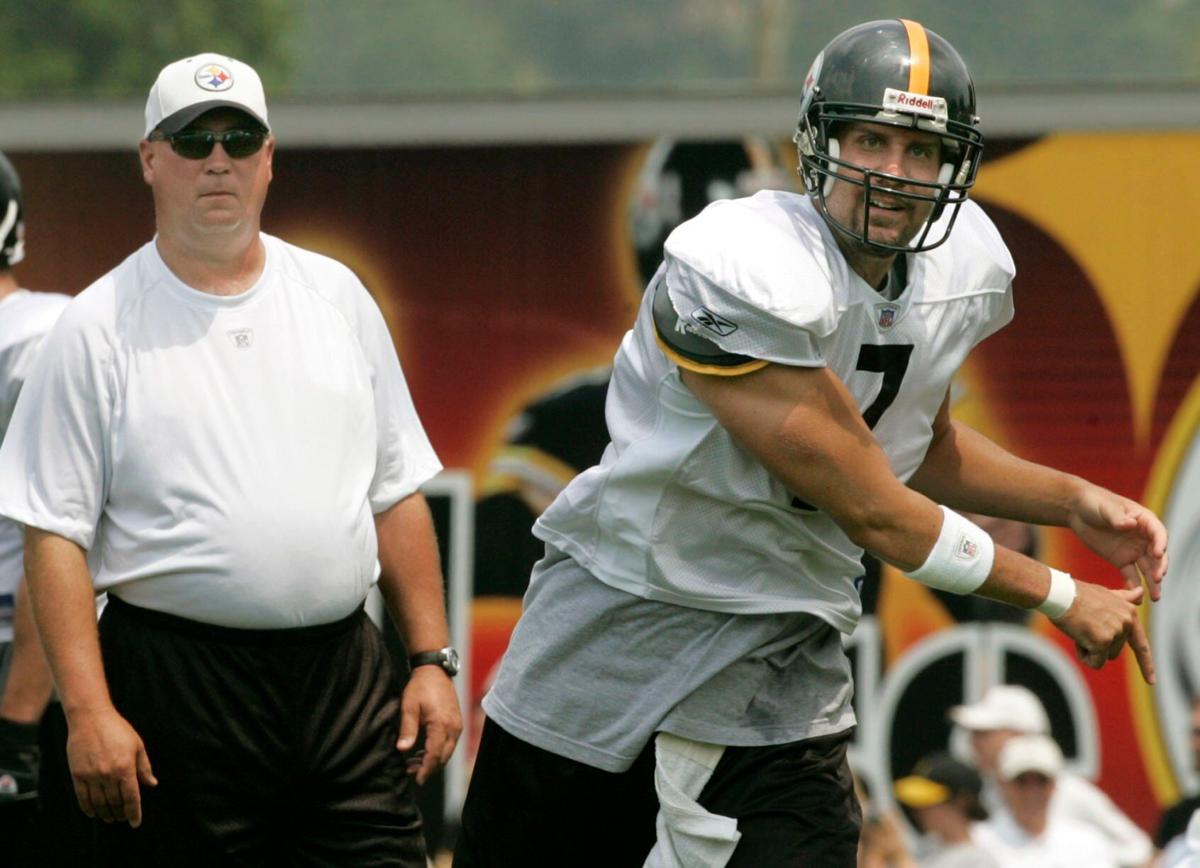 Life in the Red Podcast: Transfer QBs, rounding out the football staff, Amy Williams and Co.'s impressive win and more

The latest in Nebraska football recruiting and staff developments, followed by a long hoops discussion, including Amy Williams' group.

Mickey Joseph, as expected, is putting his stamp on the Nebraska wide receivers room.

The addition of LSU transfer Trey Palmer, a proven SEC weapon, certainly gets your attention if you bleed Husker red.

Factoring in newcomers and holdovers, Nebraska's wideouts and tight ends are the offense's strongest position groups.

Recruiting reset: Nebraska's transfer-heavy 2022 class so far and what's left to do (quite a bit, actually)

I’m not certain that’s the best news for the Huskers.

You perhaps saw how Michigan captured the Big Ten this season, with a finely-tuned run game that bulldozed Ohio State on a snowy day at the Big House.

Scott Frost has emphasized the need to bolster Nebraska's conventional run game (i.e., get more out of the running backs).

Along those lines, new Nebraska offensive coordinator Mark Whipple’s recent comments may help "Run The Ball Guy" in the Husker fan base sleep better at night.

"The Pittsburgh Steelers is always going to be in my blood," said Whipple, the storied NFL franchise's quarterbacks coach from 2004 to 2006. "We won a Super Bowl (to cap the 2005 season), and (offensive line coach) Russ Grimm said it best: Good teams run the ball when the other team knows they’re going to run it.

"That’s in my DNA and it always has been. But I also go back to what I said first, that I want to do what the defense doesn’t think I’m going to do. That’s what it is. Those things will come together. You build it up. To me, you build your offense to handle Michigan and Ohio State."

Bolstering the run game has to be part of Whipple and Frost's "build-it-up" process in advance of spring ball.

"When I was in the ACC, it was Clemson," added Whipple, the Pitt Panthers' offensive coordinator from 2019 to 2021. "What do we need to do to beat Clemson? (Former Clemson defensive coordinator Brent) Venables does a great job. When I went to Pittsburgh, I asked the kids, what do we need? They kicked our tail the year before down there ..."

Clemson actually kicked Pitt's tails in 2020 to the tune of 52-17, with the Panthers managing only 16 rushing yards on 24 carries.

"It’s the same thing now," Whipple said. "We don’t have Ohio State on the schedule (in 2022), but we have Michigan. What do we need to do? How do we beat Michigan? Obviously, how do you beat Northwestern?

"When you’re in the NFL and you’re in the AFC North and it’s cold weather and the wind is blowing and you’re in January, it might be 40 mph and you’ve got to be able to run the ball. … We don’t have to worry about that as much here (at Nebraska), but there’s going to be some cold days that way here."

Tom Osborne emphasized the importance of Nebraska being able to run the ball well in the wind and cold. It seems many people forget what made NU a championship-caliber outfit during the 1970s and 1990s. Opponents definitely knew what was coming.

It seems Whipple understands. But we'll see on that.

Now, if only Nebraska could pluck a proven running back out of that portal.

* Austin Allen, the 2021 Big Ten tight end of the year, obviously is a sizable loss from Nebraska's offense.

Allen, though, raves about Travis Vokolek, a 6-foot-6, 260-pound senior-to-be who showed glimpses of greatness in 2021 after missing the first three games with an injury. Vokolek finished with 11 receptions for 127 yards.

"Travis is a really, really, really good tight end," said Allen, who had 38 receptions for 602 yards and two touchdowns this season. "Sometimes what he did was kind of overshadowed. If I had one big play in a game, and Travis had three catches for really hard-fought yards, that was overshadowed by the one big play because that's all the fans remember.

"But Travis is a guy who's going to put in the work every single day. He's going to put his nose down and do what he needs to do to get this team right. That's a big reason why he stayed in college. He's an excellent player, and I think people are going to see that really soon."

In addition to his pass-catching prowess, Vokolek is one of the team's best blockers.

"He's a huge body," Allen said. "He's got the length. It's hard for guys to get off his blocks. He's physical and nasty at the point of attack with his blocks."

* By the way, Allen's training for the NFL at XPE Sports in Fort Lauderdale, Florida.

One reason is three-time Pro Bowler Anquan Boldin is a routes coach at the facility, Allen said.

Strikes me as a really good reason.

Steven M. Sipple: Orgeron says of Bill Busch: 'I didn't have anybody work harder in recruiting'

* Ed Orgeron's recent comments on "Early Break" (93.7 FM) regarding former LSU quarterback Joe Burrow provide a window into the mind of one of the NFL's brightest young stars.

"We had a recruiting meeting on his campus visit (in 2018) — he didn't want to be recruited; he just wanted to talk football," recalled Orgeron, the Tigers' head coach at the time. "It was a Saturday morning. There were six of us in that meeting, including me. It took me five minutes to figure out Joe Burrow was by far the smartest person in that room. By far.

"That included me, and that didn't piss me off at all, I promise you. I mean, I've been with Matt Leinart (at USC), I've been with Heisman Trophy winners. This guy was just far and above anything, and I knew he had the moxie and guts to be a champion."

Operating a spread offense is about making quick decisions. Burrow was masterful in that regard as LSU won all the marbles in 2019.

"You're only blocking with five (linemen)," Orgeron noted. "But, man, you've got some choices to make, and Joe was like a coach on the field. He knew exactly where to go with the ball."

Amy Williams' crew is here this season for the long haul. Bank on it.

And circle that little rematch next Sunday in Iowa City.

Chatelain: Zac Taylor walked into a bar, and made Cincinnati fall in love

Zac Taylor seems to be the perfect coach at the perfect time for the Cincinnati Bengals, writes Dirk Chatelain. And the proof is a simple gesture he made after their historic playoff win.

Several players have entered Nebraska's 2023 picture at quarterback, and we take a look at some of those prospects along with a preview of junior day.

Nebraska offered a scholarship to a legacy in-state prospect on Saturday afternoon.

"Every school that I've gone to, I've gotten a 'Go Big Red' as soon as I walked in," Bryan Applewhite says of life on the recruiting trail.

McKewon: Mickey Joseph, already a hit in Omaha area, has the ‘juice’ to unlock it for Huskers

In the last several years, the Huskers have had a seeming lack of priority and energy in recruiting the Omaha area. Not so with Mickey Joseph, who has already made an impression.

Decoldest Crawford on radio: Husker receivers coach Joseph 'is going to keep it real with you'

Omar Brown — the FCS defensive freshman of the year in 2019 — is transferring to Nebraska from Northern Iowa, giving the Huskers another newcomer to the secondary.

Linebacker Wynden Ho’ohuli, the highest-rated defender in Nebraska's 2021 recruiting class, has entered the transfer portal after one season with the Huskers.

Nebraska defensive backs coach Travis Fisher’s set an expectation for next season without giving a single interview. He’s overhauled the entire room with four transfers and at least three freshmen.

With the start of winter conditioning, the official Husker football roster was updated Monday to reflect all of the newcomers who joined the team this semester.

Nebraska running back Rahmir Johnson carries the ball on Oct. 16, 2021, in Minneapolis.