Subscribe
Share This
Watch now: NU officials say they're looking at fixes for pedestrian bottleneck outside Memorial Stadium
0 Comments
Share this
GET EXCLUSIVE TEXTS!
Sign up for breaking news and analysis from our Huskers experts
1 of 2 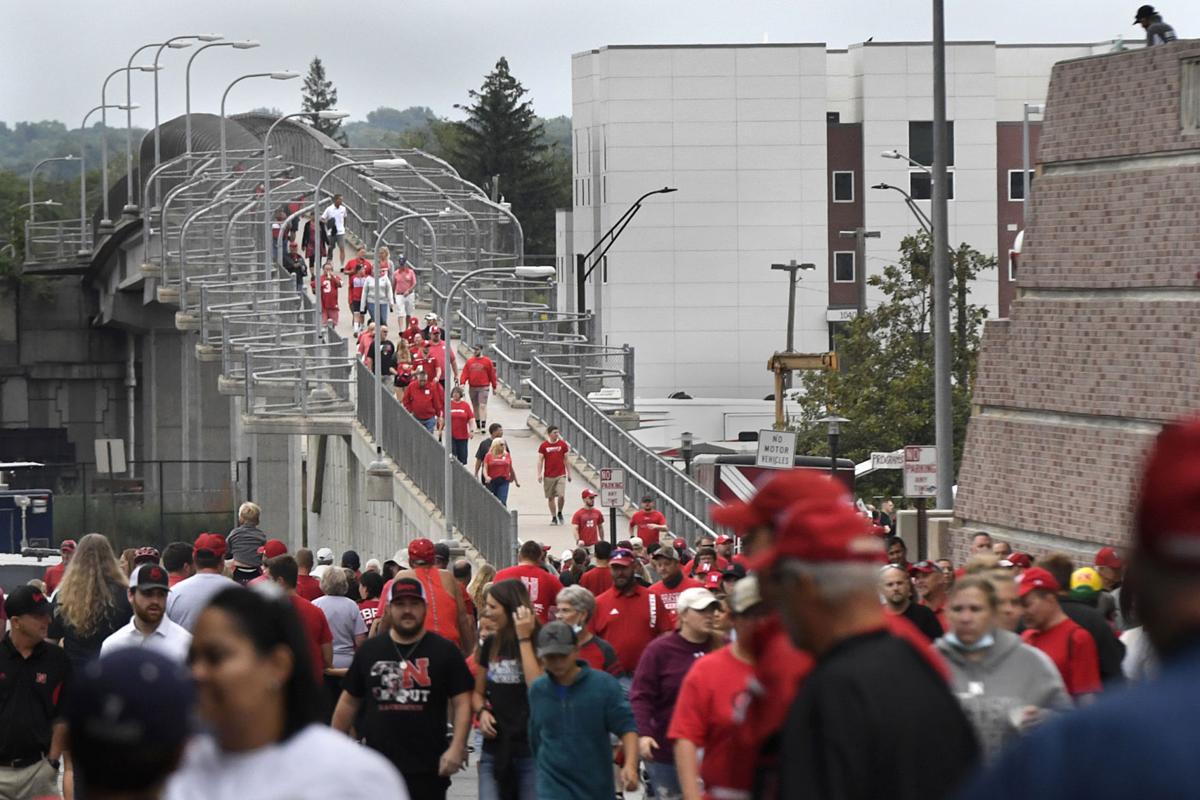 Fans walk along Stadium Drive and over the footbridge between Memorial Stadium and the North Bottoms before Nebraska's home game against Fordham on Sept. 4. With the walking path on the northeast corner of the stadium closed for construction, fans from West Stadium and North Stadium are all funneled onto Stadium Drive, where a bottleneck formed after Saturday's loss to Michigan. 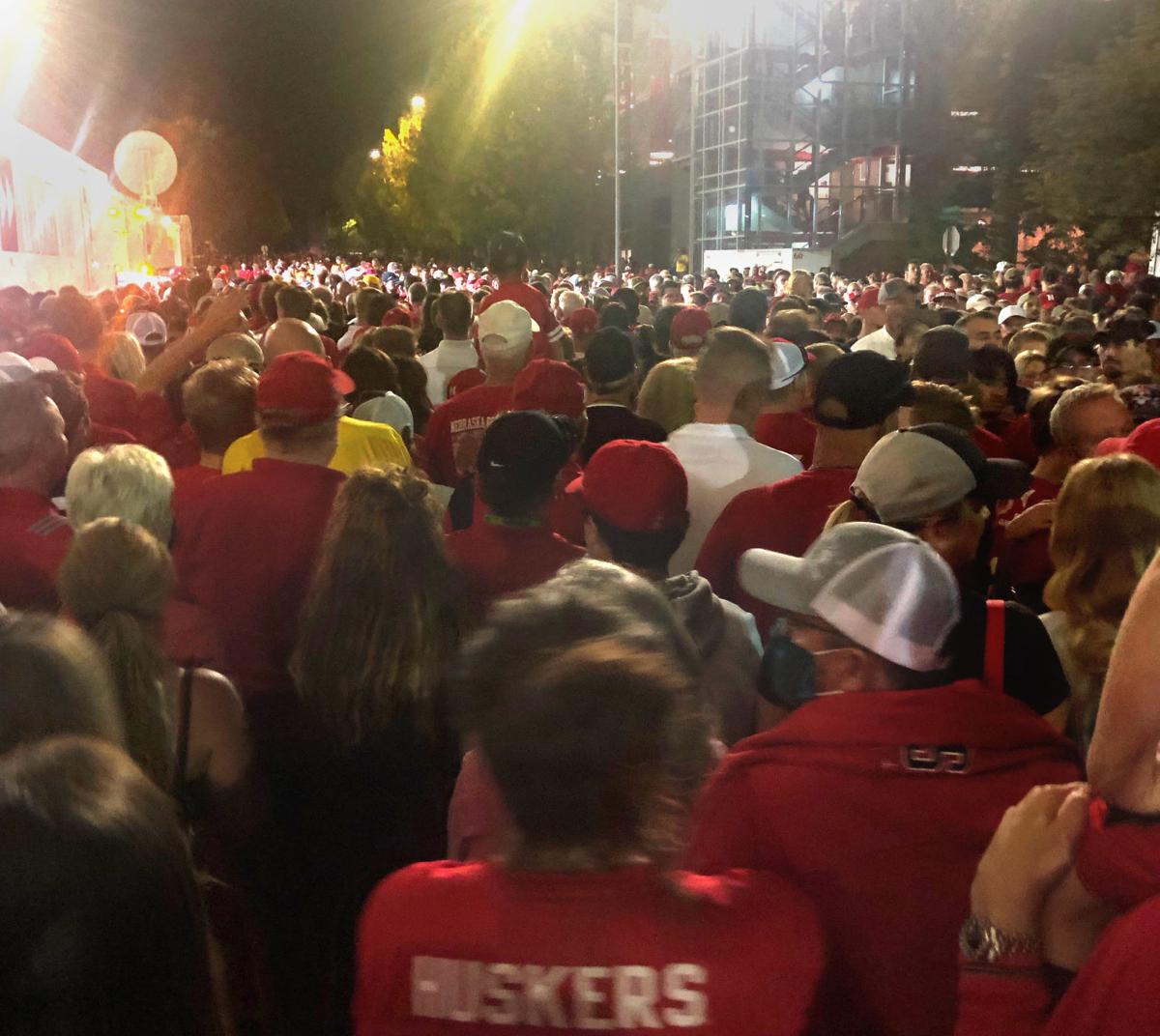 If Saturday's down-to-the-wire loss to Michigan wasn't frustrating enough for Husker fans, imagine being stuck in a 30-minute traffic jam before even getting to your vehicle.

That's what some fans reported along Stadium Drive in the moments after Nebraska's 32-29 loss to the Wolverines on Saturday night. The gridlock essentially left hundreds, perhaps thousands, of fans standing shoulder to shoulder, trudging forward only in small steps while buffeted by those trying to make progress in the other direction.

University officials say the pedestrian traffic jam was rare, but not unheard of, the result of a combination of factors that doubled the frustration of many fans on their way home.

First, the Huskers were playing the Wolverines under the lights of Memorial Stadium in a nationally televised game.

The prime time slot on ABC brought higher production to the telecast, including more TV trucks packed with tools and toys along Stadium Drive where they could plug into the west side of the stadium.

Then, the back-and-forth, down-to-the-wire game kept fans in their seats until the final minute, prompting most of the 90,000 people in attendance to leave at nearly the same time.

Blocked from turning to the east by the $155 million football training facility now under construction, those who left North Stadium were forced to turn west onto Stadium Drive.

On their way downtown or to the Haymarket, the North Stadium ticket holders ran into fans from the rest of the stadium attempting to head north over the footbridge toward the North Bottoms.

In the end, thousands of people remained at a standstill on Stadium Drive, squeezed between the stadium and fences protecting the Champions Club, waiting for a lane to open up so they could continue to their destination, in some cases taking nearly half an hour to trudge the length of a football field.

Some savvy fans sought breathing room by going back into the once crowded stadium.

“It was one of those perfect storm scenarios,” said Capt. Aaron Pembleton of the University Police Department.

A week earlier, the crowd’s exodus from Memorial Stadium following the Huskers’ night game against Northwestern went smoothly, which Pembleton attributed to an easy Nebraska win and a smaller TV footprint that opened up space for fans to head in their direction of choice.

There have been a handful of other games where similar conditions have existed, Davidson said, as well as the Garth Brooks concert at Memorial Stadium in August, when fans essentially all left at the same time.

“We recognize this is serious and that it’s happened before,” Davidson said. “But we’re always looking to make improvements and keep the needle moving in the right direction.”

The situation prompted emails from fans concerned at navigating a choke-point on their way home.

Davidson said Husker Athletics is working with campus police and the Lincoln Police Department to develop a plan to alleviate the issue, adding much of what’s been discussed in the days since Saturday’s game will crystallize in the coming weeks.

That might include something as simple as telling people in certain sections of the stadium to exit out of certain gates, or directing fans seated in North Stadium to leave through East Stadium if they intend to go south.

Discussion has also included moving vendors from locations on Stadium Drive to reduce snags for pedestrians, or dividing the street to keep traffic moving more freely in both directions.

Husker Athletics expects to announce its plan to address congestion on Stadium Drive the week of Oct. 25. The Huskers are scheduled to play Purdue in their next home game on Oct. 30.

“This was the perfect storm, but we’re not going to set back on our heels and say hopefully this doesn’t happen again,” Davidson said. “If we see a problem, we’ll look at it and see how we can improve the fan experience and fan safety.”

Gene Chinander, the father of Nebraska defensive coordinator Erik Chinander, died Thursday in a car accident. He was 69.

After Minnesota's beat up Nebraska physically the past two years, Huskers say, 'We owe them one'

A 2019 game still sticks in Scott Frost's mind, particularly for what he perceived as "uninspired" play. Now, NU is "more of a grown-up team."

Chatelain: With Adrian Martinez, the narrative is never finished

Adrian Martinez is a fascinating case study for narratives, Dirk Chatelain writes. But his career keeps taking unpredictable turns, so it’s wise to enter every Saturday with an open mind.

Chatelain: The true agony of following Nebraska football is expecting Huskers to change

Fans walk along Stadium Drive and over the footbridge between Memorial Stadium and the North Bottoms before Nebraska's home game against Fordham on Sept. 4. With the walking path on the northeast corner of the stadium closed for construction, fans from West Stadium and North Stadium are all funneled onto Stadium Drive, where a bottleneck formed after Saturday's loss to Michigan.