Subscribe
Share This
A 'relentless' attack on every point by NU means Creighton's first win in the series will have to wait
0 Comments
Share this
GET EXCLUSIVE TEXTS!
Sign up for breaking news and analysis from our Huskers experts
1 of 5 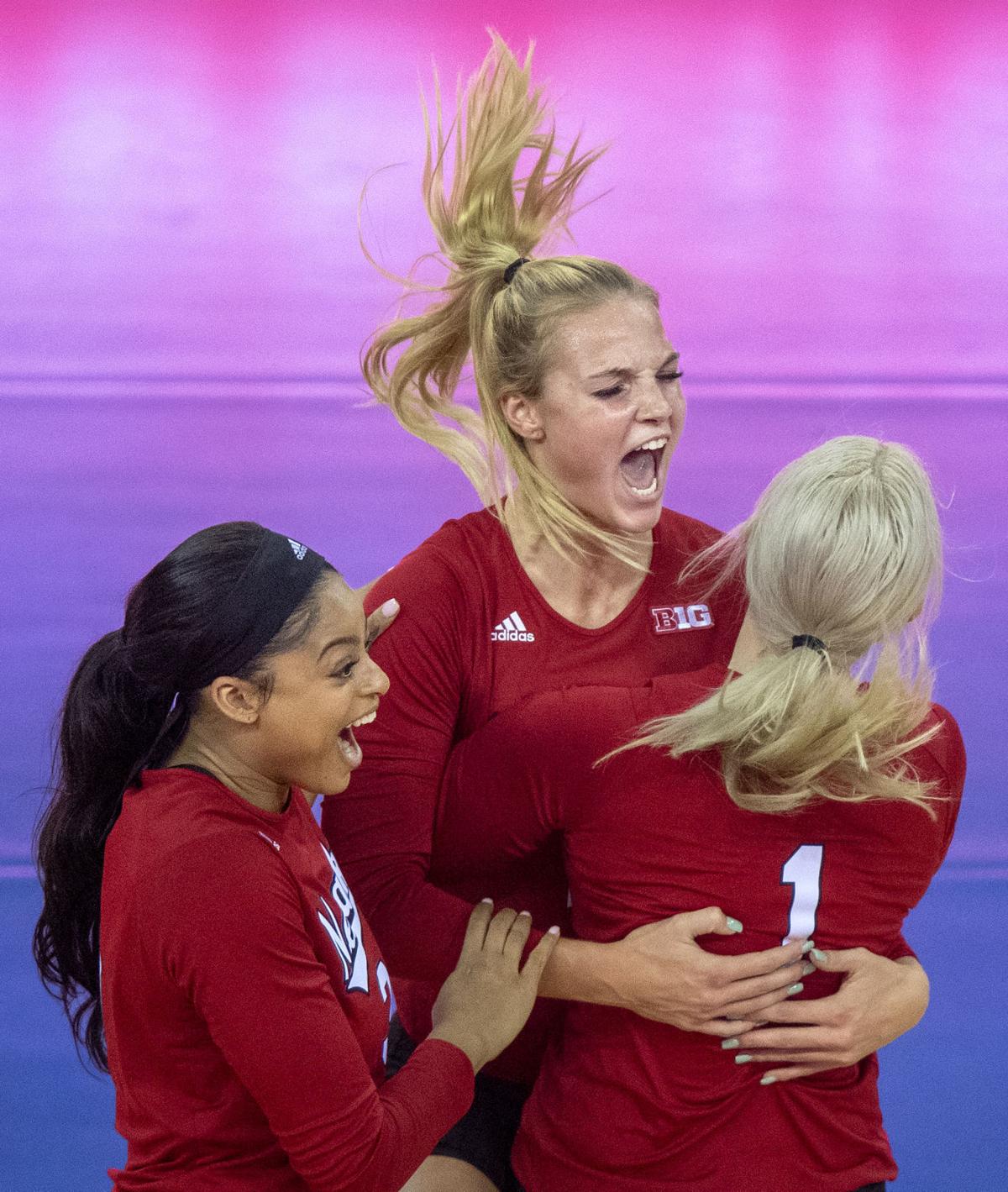 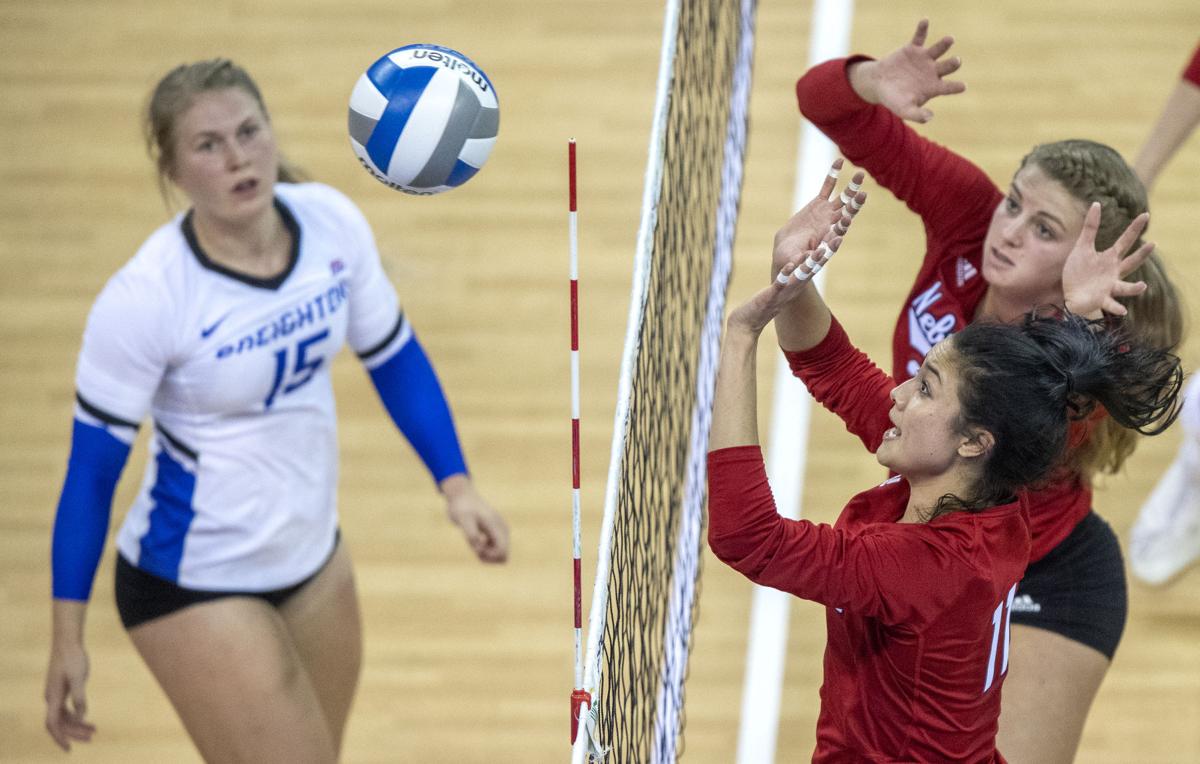 Nebraska’s Lexi Sun (11) and Callie Schwarzenbach combine on a third-set block to give the Huskers a 17-9 lead as Creighton's Kendra Wait (15) looks on Wednesday at CHI Health Center Omaha. 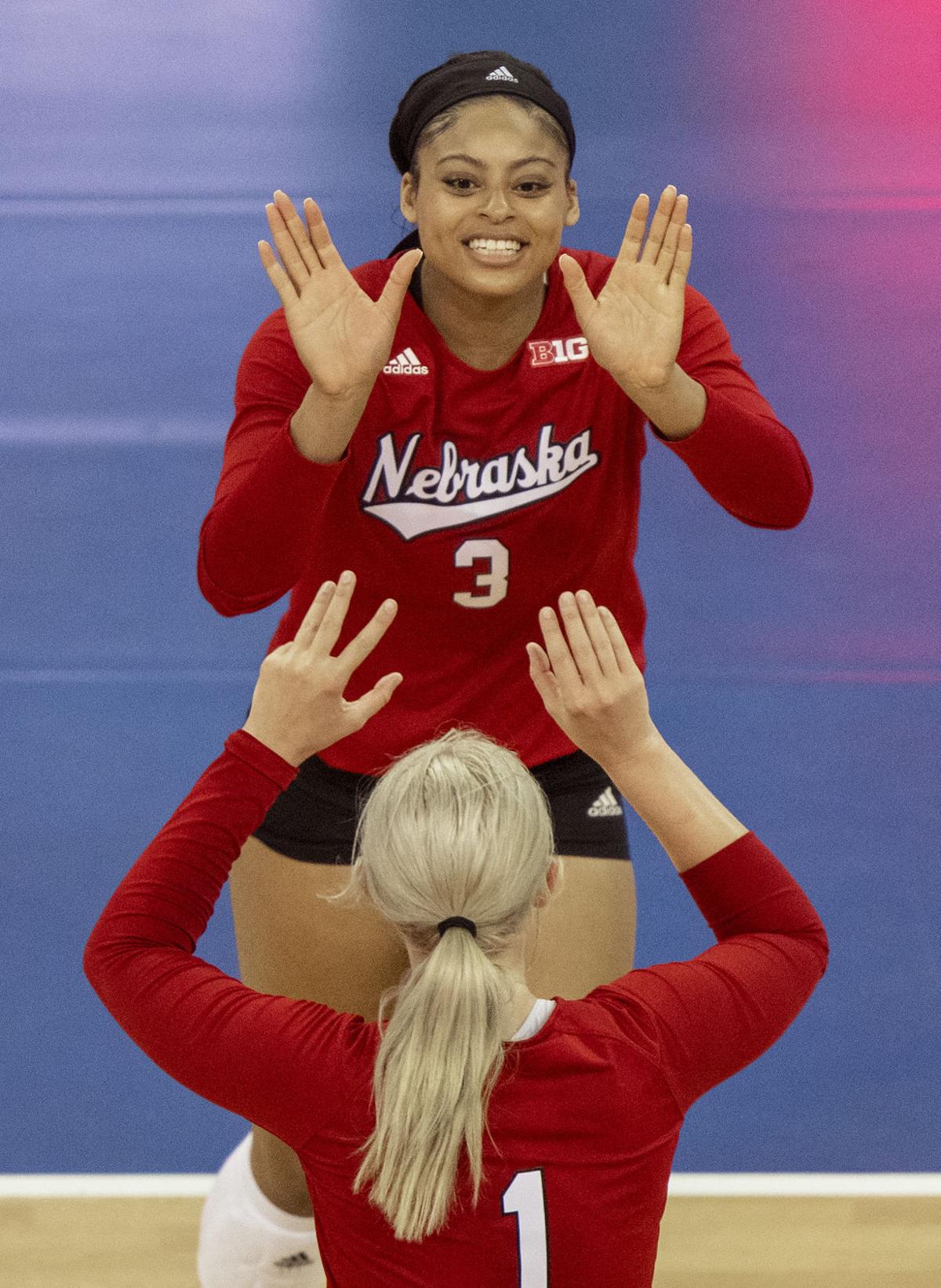 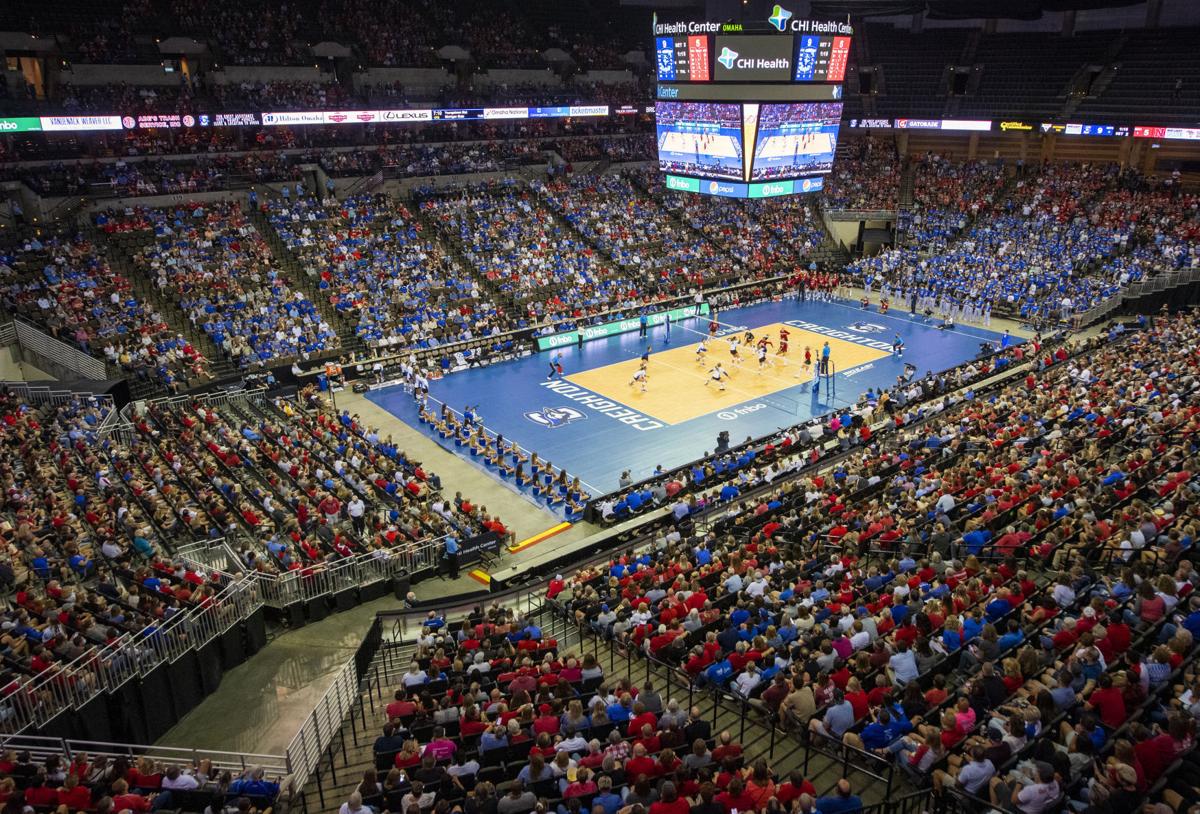 Creighton blue and Nebraska red fill the stands during the teams' volleyball match on Wednesday at CHI Health Center Omaha. 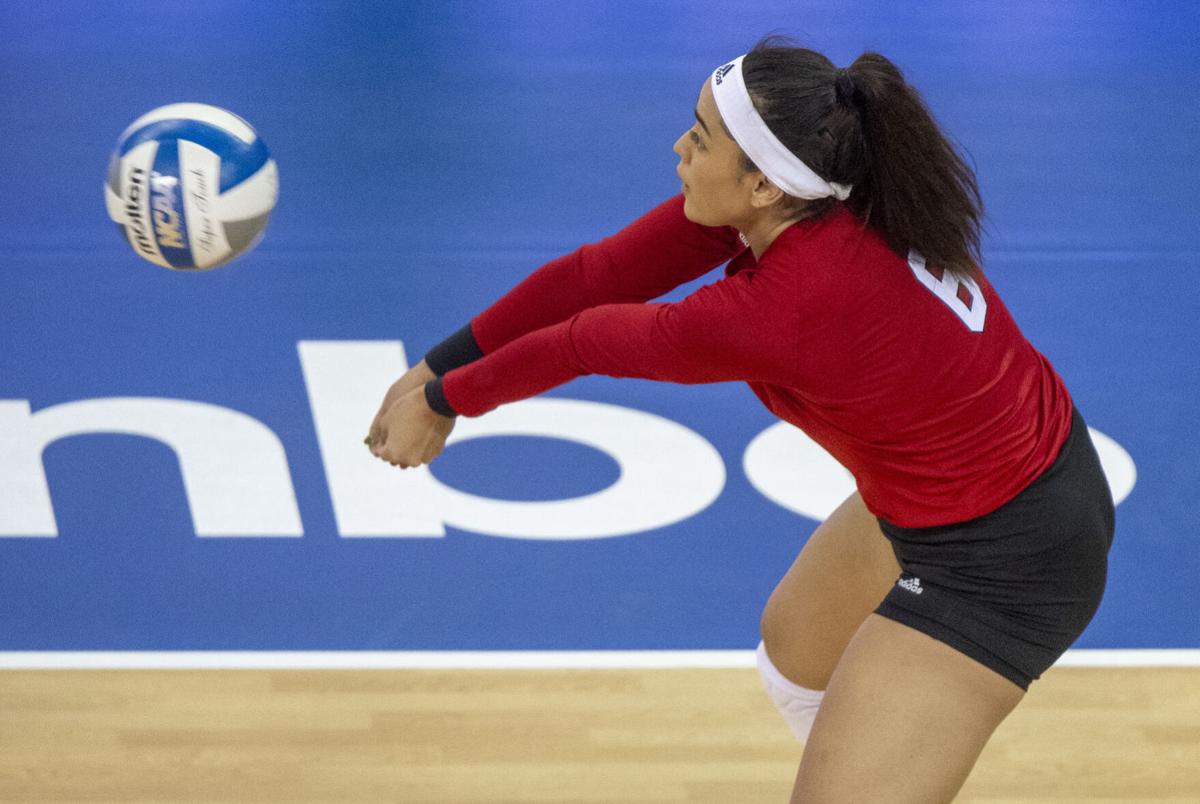 Nebraska’s Keonilei Akana lifts a ball in the third set against Creighton on Wednesday at CHI Health Center Omaha.

OMAHA — This isn’t the year for Creighton, either.

Nebraska’s never lost to Creighton in volleyball, but there were those who wondered if this was the Bluejays’ shot to end the streak.

The Jays beat defending national champion Kentucky last week, and had their best start to the season at 6-0. There was some grumbling that Creighton making a nice jump from unranked to No. 19 wasn't high enough.

Nebraska now leads the all-time series 20-0, including three straight when both teams were ranked in the top 20.

The best match of the series, in 2018 when Nebraska rallied from an 0-2 deficit, was a showdown between a big hitter for each school, Mikaela Foecke and Taryn Kloth.

This match will be remembered for Nebraska’s break-your-heart defense, with Nebraska’s 69 digs meaning Creighton only got 28 kills over 131 hitting attempts.

“Our goal tonight was to play relentless every point,” Nebraska coach John Cook said. “I think we were very close.”

Creighton had a .053 hitting percentage after hitting .244 or better in each match this season.

“I thought the stage rattled us,” Creighton coach Kirsten Bernthal Booth said. “We were far more tentative, and I think when you become tentative you become error-driven. I thought Nebraska’s defense was the best we’ve seen.”

Akana said she and her back-row mates had a blast stopping several big shots.

“Our goal was to be aggressive and not let a lot of balls drop on the floor, and I think we did a really good job of that,” Akana said.

Nebraska didn’t convert enough of those digs to kills, hitting .177, but still had its best overall match of the season and won in its first test against a ranked team this season.

“Being able to sweep them, and especially at a place like this, definitely is a big confidence booster,” Nebraska outside hitter Lexi Sun said. “I think we know what we can do offensively and defensively and so I think this is a huge win for us.”

Nebraska got good matches from its veteran outside hitters. Sun had 11 kills, and Madi Kubik had 10. Caffey added eight kills (.462 hitting).

Nebraska landed its biggest blow to the Jays in the second set. Creighton led 18-14 with a chance to tie the match. But Nebraska reeled off eight straight points with Akana serving to take a 22-18 and never trailed again.

The Huskers found a groove, and just kept going.

“The biggest factor was we kind of stepped on it from the get-go in the beginning,” Sun said. “A lot of times we talk about how we’re slow to start in a games, and I think that that’s something that was different about tonight.”

Creighton’s season leader in kills was freshman Norah Sis. She didn’t have as much success against the Huskers, recording her first kill midway through the second set after a 0-for-17 start to the match.

Jaela Zimmerman led Creighton with eight kills but needed 42 attempts to do so. Sis finished with four kills.

“I think the key is if you look at Zimmerman and (Sis), I think they had 80 sets and they hit negative,” Cook said. “That’s how you have to beat that team. You can’t let those two go off.” 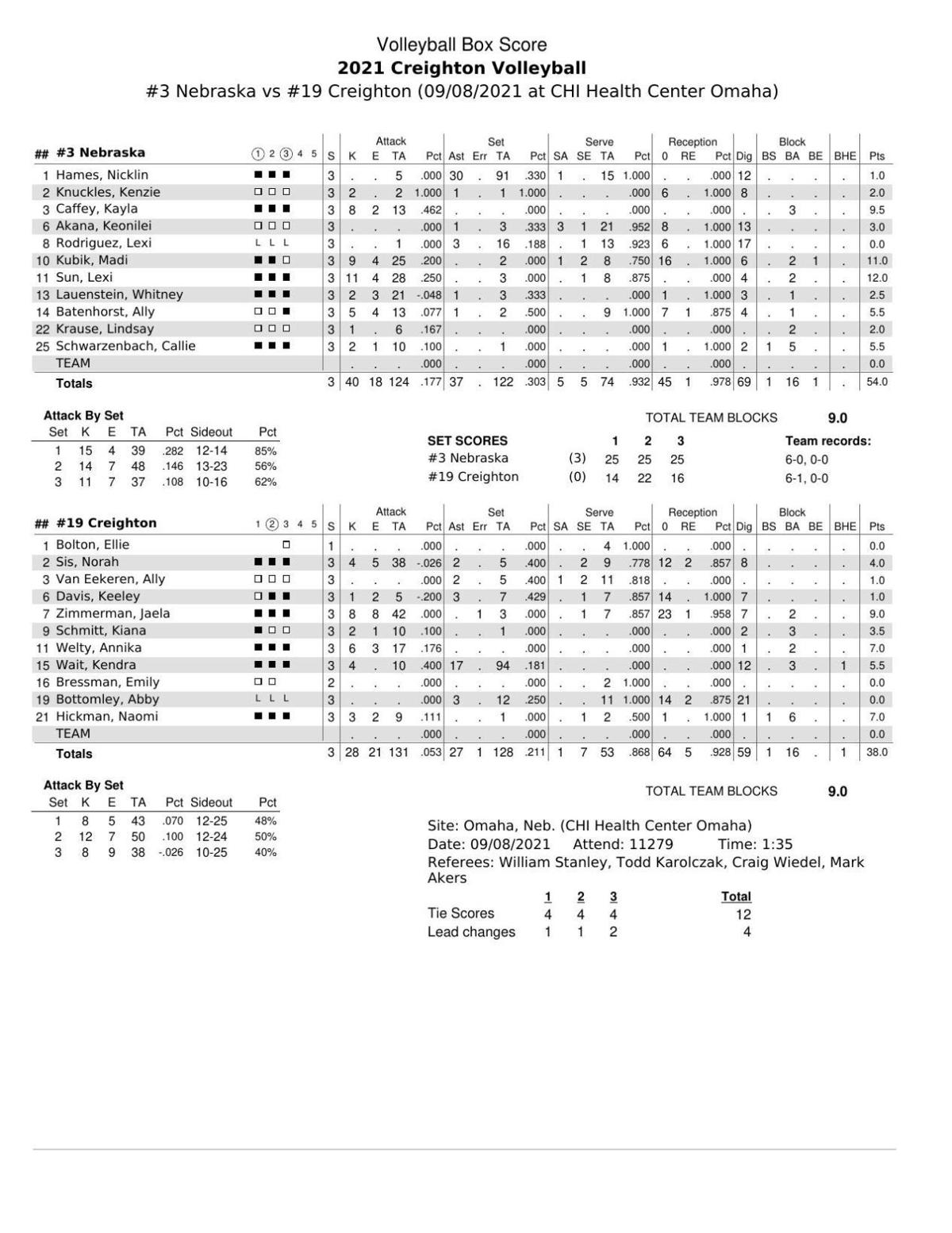 Photos: Nebraska, Creighton square off in 'celebration of the sport' in the state

Nebraska players talked about holding each other accountable after a three-game losing streak in what Madi Kubik calls "a come to Jesus" moment.

Huskers have two All-Americans on the bench. How do they get back in starting lineup?

Nebraska may be the only volleyball program with two All-Americans on the bench. So what will it take for Lexi Sun and Lauren Stivrins to get back in the starting lineup?

John Cook on the radio: Kubik's special skill, and a player-led caring gesture for a former teammate

Hitting the ball off the hands of a blocker is a skill the Huskers have worked on, one Madi Kubik utilized this week.

The NU coach when asked why Lexi Sun isn't starting: "She hasn’t been one of the best two outside hitters in practice.”

Nebraska volleyball’s new Big Ten lineup came out swinging and survived a hiccup to earn a four-set win over Northwestern.

'Trust your training': The mantra that fuels Nebraska volleyball through wins and losses

Whether Nebraska volleyball is winning or losing, they always focus on this three-word phrase — "Trust your training" — a mantra that serves as a foundation for John Cook's program.

Lauren Stivrins has started hitting during practice, and if she doesn’t have any setbacks, she may be inching closer to returning.

After six Big Ten teams advanced to the regional semifinals last season, the league returns 17 super seniors and adds five of the top 20 recruiting classes. The path to the championship is daunting.

With several star super-seniors back, is the Big Ten tougher this year? 'Absolutely,' says John Cook

Familiar — and talented — players return to Big Ten volleyball courts this season due to extra COVID year, upping the overall level of play.

Nebraska’s Lexi Sun (11) and Callie Schwarzenbach combine on a third-set block to give the Huskers a 17-9 lead as Creighton's Kendra Wait (15) looks on Wednesday at CHI Health Center Omaha.

Creighton blue and Nebraska red fill the stands during the teams' volleyball match on Wednesday at CHI Health Center Omaha.

Nebraska’s Keonilei Akana lifts a ball in the third set against Creighton on Wednesday at CHI Health Center Omaha.