Subscribe
Share This
Now that she's fully back, Lauren Stivrins has her sights on something else in last go-round with Huskers
0 Comments
Share this
GET EXCLUSIVE TEXTS!
Sign up for breaking news and analysis from our Huskers experts
1 of 2 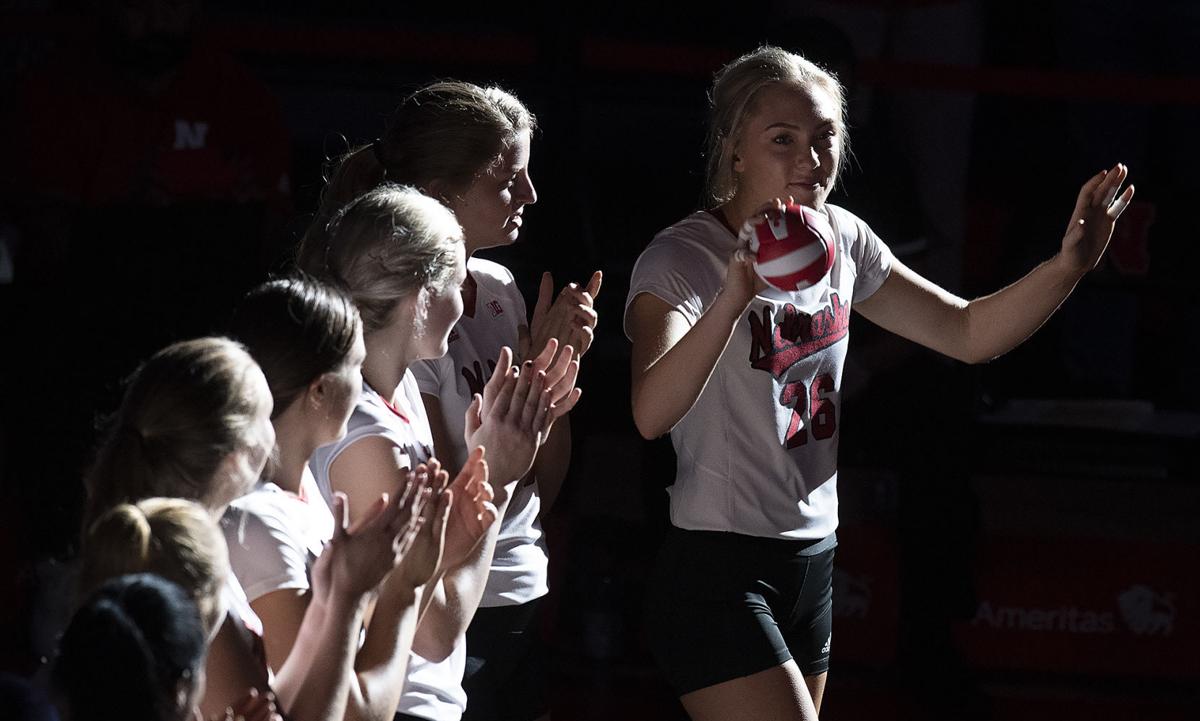 Nebraska's Lauren Stivrins (right) is introduced before the match against Michigan last week at the Devaney Sports Center. 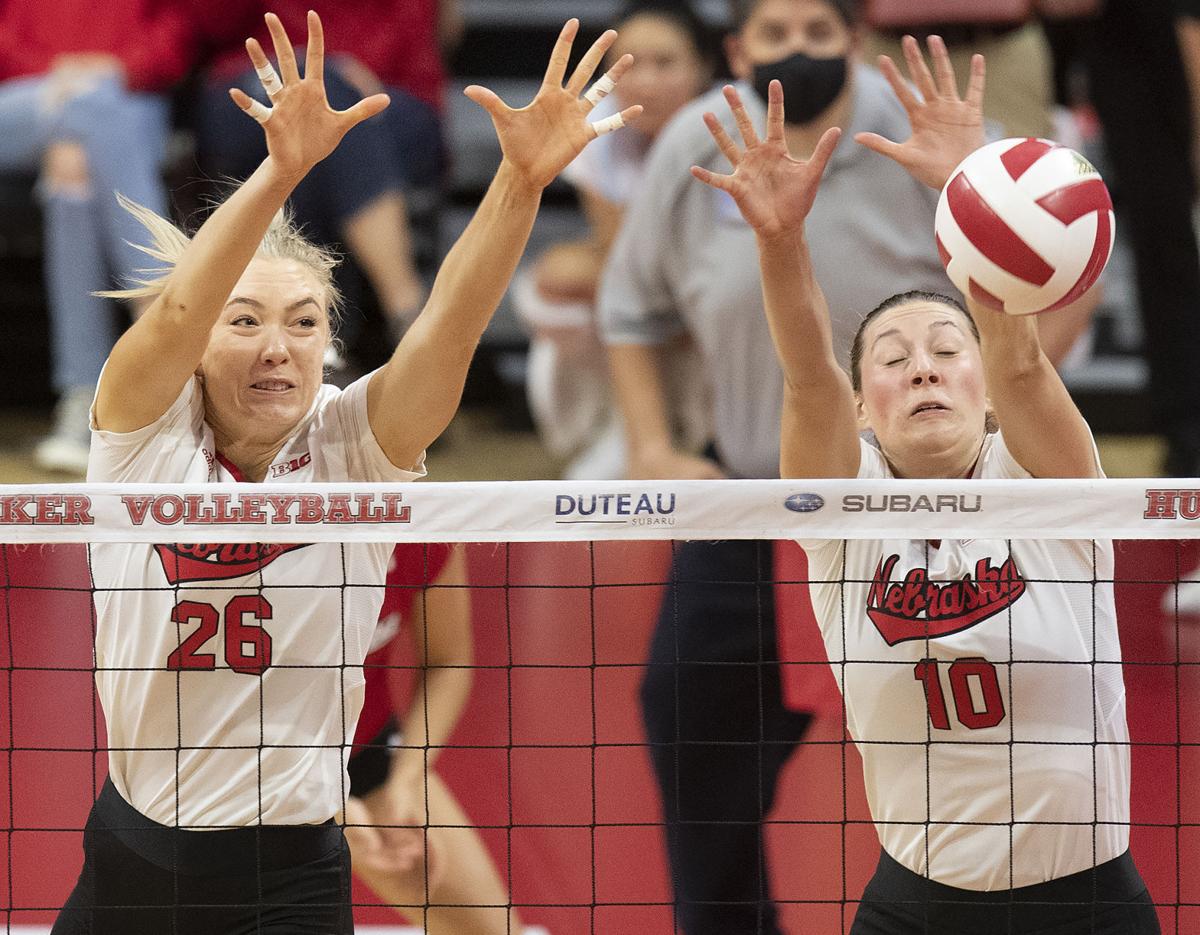 Lauren Stivrins hadn’t even taken a swing in her return match last Friday and she’d already experienced something that’s now on her all-time list.

For the fans, it had been four months of hopefulness — and then two weeks of anticipation — that Stivrins would play again for the Nebraska volleyball team.

So when her name was announced as a starter, those fans let her know how they were feeling about it all. It was one of those moments you’ll remember if you were in the building.

THE RETURN OF THE QUEEN pic.twitter.com/K2cVzxD2TA

For Stivrins it was one of her top three moments during a home match. Also on that list is when Nebraska clinched the Big Ten championship in 2017, and earlier this season when she got to see her sister, Amber, play a college match for the first time when Georgia played the Huskers.

Stivrins is already an all-timer for the Huskers, a fierce competitor who shows you and tells you how much playing volleyball for Nebraska means to her. She’s a three-time All-American who has twice played in the national championship match.

After missing the first 11 matches of the season because she had back surgery in May, Stivrins played her first two matches last weekend, with Nebraska winning both in three sets.

In doing so, she provided instant offense for a team that hadn’t had enough of that this season and changed the feeling around the Huskers.

“She’s a first-team All-American,” said Nebraska coach John Cook of Stivrins. “We don’t have many of those hanging out here right now. I think the other thing she brings is she’s very competitive and wants to win, and that spreads to other players.”

Stivrins is a player who can flat-out dominate — remember her 18 kills on 20 attempts against Maryland last season? How about a 10-for-10 display against Northwestern in 2018? And then there's the .615 hitting percentage she posted in the national championship match loss against Stanford.

Two of the top four hitting seasons in program history are the .468 Stivrins hit last year, and the .421 she hit as a sophomore.

As anticipation built for Stivrins' return, Cook said she'd be sharp from the start because of how competitive the Husker practices have been in recent weeks, and how Stivrins had rebuilt her body.

But could we really believe that? Think about how many bad shots Tiger Woods hit when he came back from major injuries.

But Cook was right. In her first match, Stivrins had 11 kills on 15 attempts. She didn’t get blocked, and she never hit out. She hit .733, the fourth-highest percentage of her career.

Stivrins was injured last season. It got to the point that Cook was ready to not have her play anymore, but Stivrins talked him out of that.

“We met with the doctors and everything and they said she couldn’t do any more damage to it, so it was just how much pain she could tolerate,” Cook said.

Stivrins was a senior last season, but players had the option to come back for an extra season due to COVID-19. That’s why Stivrins is able to play now.

But if Stivrins had been healthy at the end of last season, she probably wouldn’t have used the extra year.

“I think I would have moved on with my life,” she said.

Because Stivrins redshirted as a freshman, she’s now in her sixth season as a college athlete. If she would have been healthy, she likely would have gotten a chance to train with the United States national team last summer, and start a pro career this fall.

Her back has felt great for several weeks now. During practice, if she makes an error, she’ll get on the floor and do a calisthenic, just like the rest of the players.

“The hardest part for me was just getting all of my muscle back,” Stivrins said. “After surgery, I lost almost 20 pounds — and (the team nutritionist) told me that over 11 of those were muscle. So I had a lot of work to do to get back to where I was.”

Now that she’s playing, Stivrins is all-in on helping the Huskers play great during the last three months of the season.

“I’m just here to make sure that this program gets back on track before I leave,” she said. “I don’t know, I felt like when I came in we were at a certain level and competing every single year in Final Fours, and we just haven’t been that in the last few years. So I just wanted to come back and make sure that from here on this team knows what they’re capable of and has the confidence to do so. So that’s my mission.”

* Tenth-ranked Nebraska’s match against No. 13 Penn State on Friday is a matchup between the teams tied for first place in the Big Ten at 4-0. It's Nebraska's first Big Ten match against a ranked team.

* Penn State leads the nation in blocking with 3.32 per set.

* Nebraska’s Lexi Sun is one of the 30 college volleyball players who are candidates for the Senior CLASS Award.

One Nebraska volleyball player said she tries not to focus too much on NIL deals during the season, but RAYGUN's deal didn’t take too much work on her end and offers children's shirts.

While Nicklin Hames only missed the team's opening weekend, the effects of her absence were felt well into the regular season.

No. 9 Nebraska has been playing at higher level since Big Ten play started. Here's why

Since Big Ten play started, Nebraska volleyball has climbed to first place in the league. Lincoln Arneal takes a look at why the Huskers have improved so much since the nonconference season ended.

During Big Ten play, Madi Kubik is averaging 4.39 kills per set with a .270 hitting percentage. We've seen this kind of hot play from her before.

The Huskers turned in a clean 2-0 weekend, highlighted by a win against then-No. 13 Penn State. And they cleaned up in the league's weekly honors.

The Huskers had plenty of strong matches to go around, including Madi Kubik, who continues her red-hot start to the Big Ten season.

What started as the Kubik and Krause Show turned into a dominant team effort for No. 9 Nebraska volleyball as it swept Indiana.

Nebraska's Lauren Stivrins (right) is introduced before the match against Michigan last week at the Devaney Sports Center.