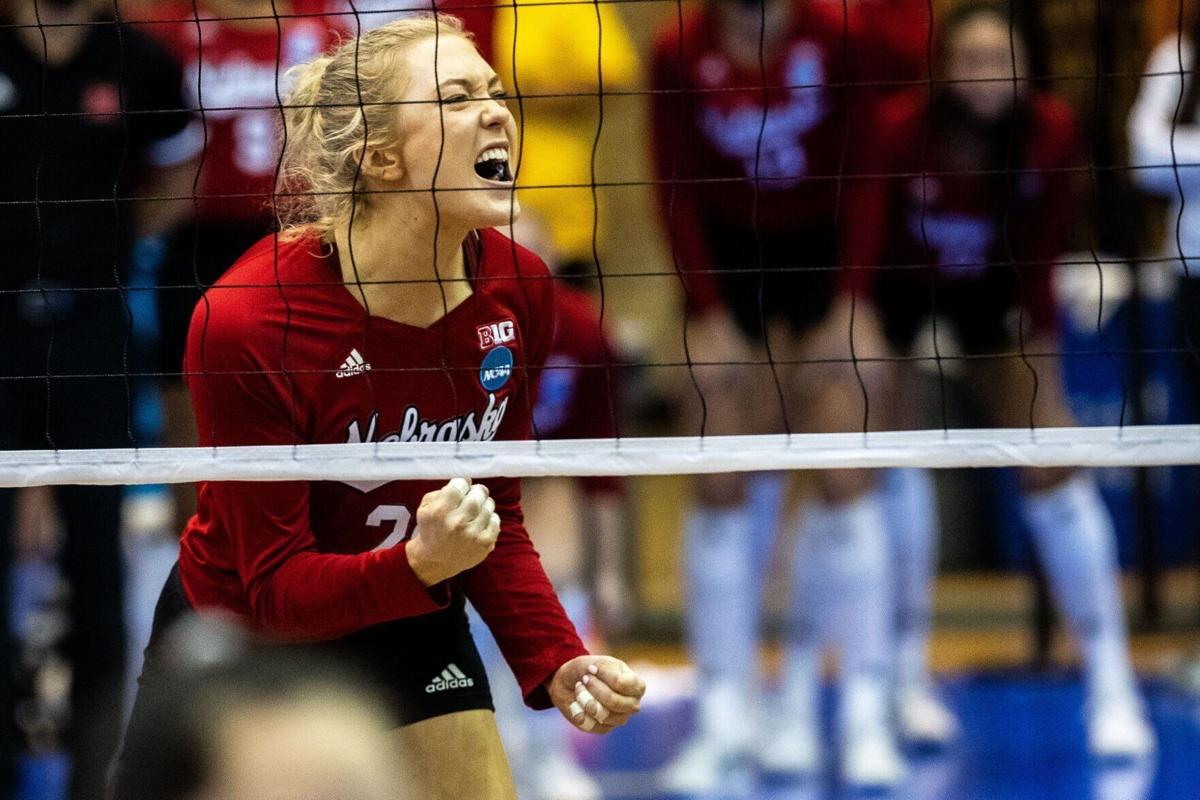 Nebraska's Lauren Stivrins celebrates a point against Texas at Gregory Gymnasium in Austin, Texas, on Dec. 11. 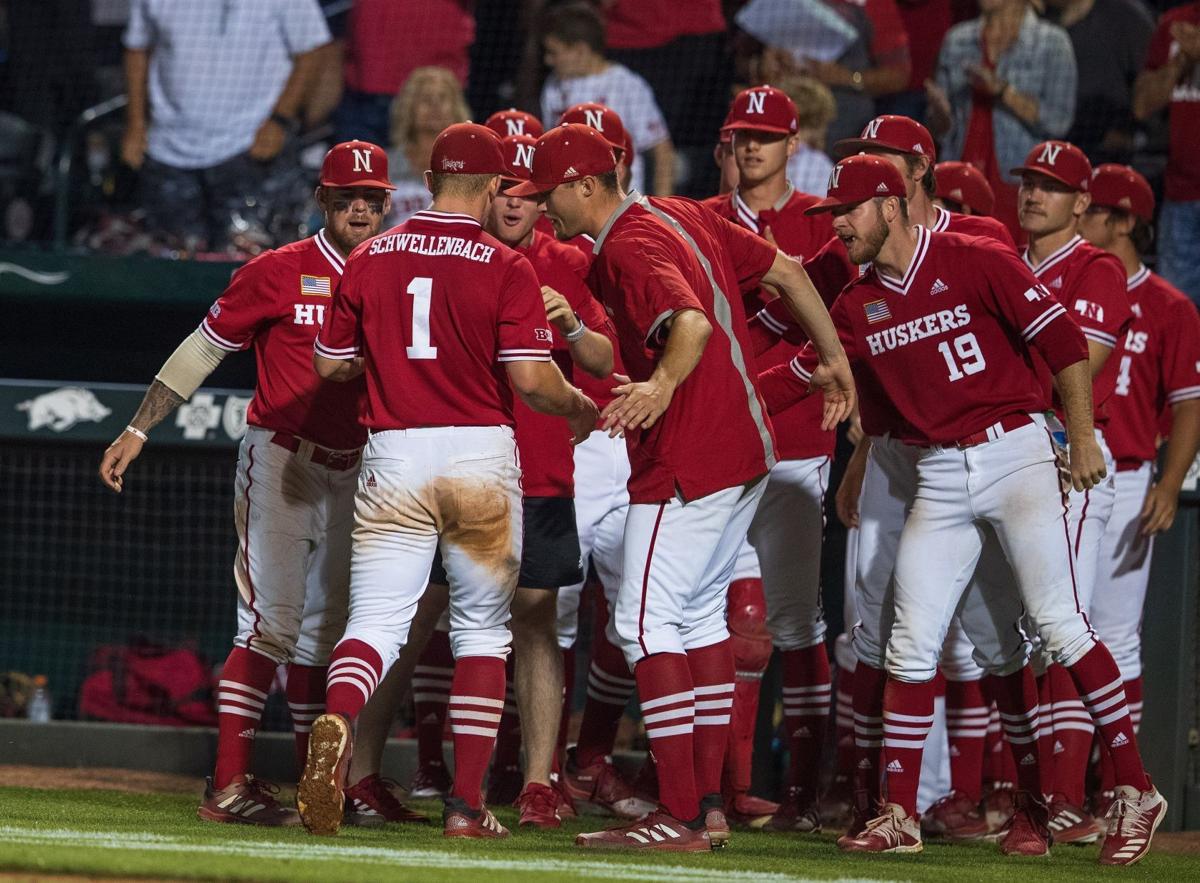 Nebraska's Spencer Schwellenbach is welcomed after closing out an inning against Arkansas during their NCAA regional game on June 6 in Fayetteville, Ark. 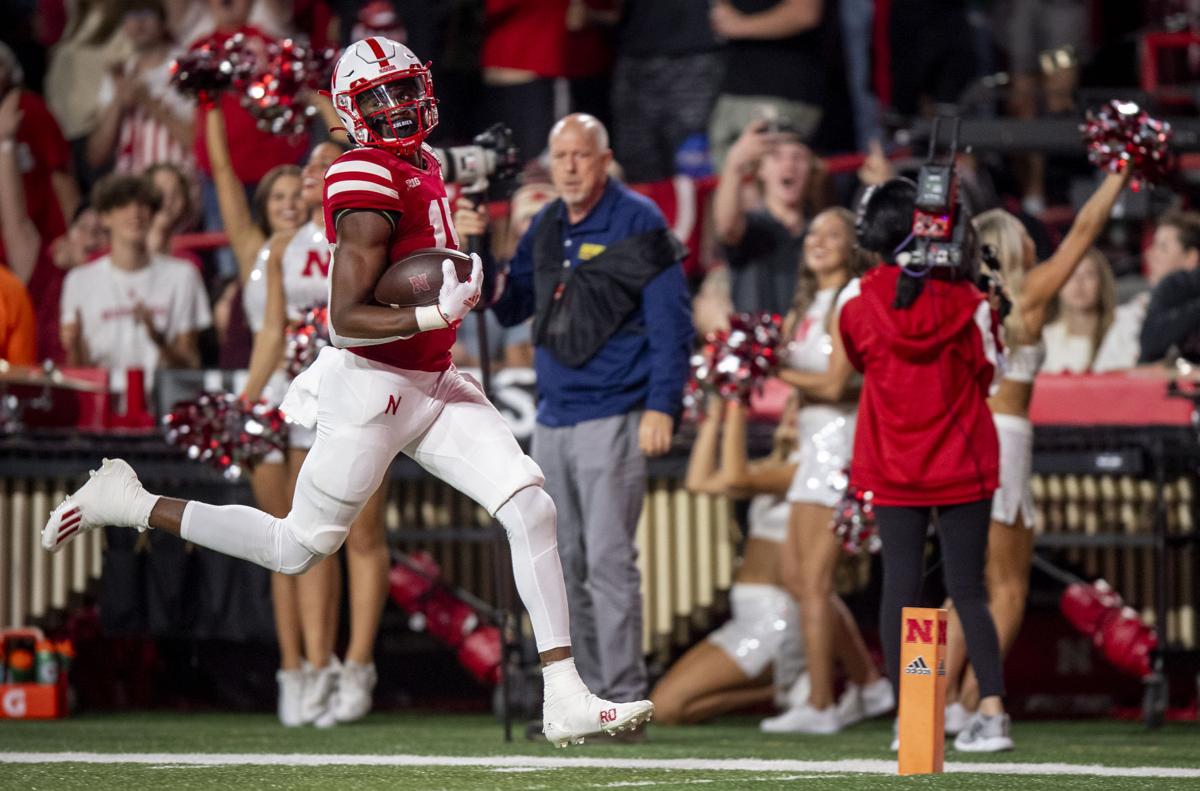 Nebraska wide receiver Zavier Betts (15) scores on an 83-yard run in the third quarter against Northwestern on Oct. 2 at Memorial Stadium.

If you like to load your planner with Husker games, note the first NU competition of the new year (men's hoops vs. Ohio State on Sunday), the Red-White Spring Game (April 9) and football in Ireland (Aug. 27).

This is a "games" list, but we also want to give shoutouts to the Nebraska bowling team for winning an NCAA championship, Kate Smith for her Big Ten championship in women's golf, Mayson Conner's bronze-medal leap in high jump at the NCAA outdoor championships, Abigail Knapton wrapping up the best diving career at NU, and the Huskers' fourth-place finish at NCAAs in men's gymnastics.

A victory that punches a ticket to the final four in any sport makes for a euphoric moment (and will be high on this list).

To do so against a nemesis that beat you in the NCAA Tournament the previous season and on its home floor? Even sweeter.

NU coach John Cook called it one of the greatest wins in program history, and that's saying something.

The underdog Huskers knocked off No. 2 Texas in four sets. The Horns couldn't get anything going against NU's stout defense, and Madi Kubik, Lindsay Krause and Texas native Ally Batenhorst led the offensive attack.

NU was back in the Final Four.

'Tonight they put it together:' Sparked by freshmen — and defense, of course — NU stuns Texas to reach Final Four

More than 11,000 rabid fans, most of them cheering for the home team, were hoping to see No. 1 Arkansas wrap up a regional title.

Spencer Schwellenbach and a tough-minded group of Huskers crashed the party, or delayed it, anyway.

Schwellenbach pieced together one of the more memorable individual performances in program history, pitching 4⅔ shutout innings of relief, silencing one of the top lineups in the country, and the crowd.

Griffin Everitt had the game's biggest hit, a two-out, two-run single in the fifth to give NU the lead for good.

NU fell short a day later in the rematch, but a message was sent: Will Bolt had NU baseball back on track.

'You got to have that fight': Huskers force winner-take-all regional final with gritty win over No. 1 Arkansas

3. A classic with buddy Wisconsin

A week after beating Texas in the Elite Eight, Nebraska was playing for a national championship. Standing in the way was No. 4 Wisconsin, which was seeking its first national title and had won seven straight vs. the Big Red.

The Huskers took the first set, setting the tone for one heck of a match.

The match had it all — defense, drama, digs — and it was the most-watched NCAA volleyball final on TV.

It was a classic.

Huskers' memorable big finish to 2021 falls a set short; 'That's what a national championship should be'

Coming off a 56-7 drubbing of Northwestern, and two near-misses against nationally-ranked Oklahoma and Michigan State, the stage was set for the Frost era to have a breakthrough win.

Adrian Martinez busted through for a 5-yard touchdown to give NU a 29-26 lead with 7:08 remaining. The sold-out crowd could feel it, but Michigan knocked in a pair of field goals and jumped on a critical fumble to escape with a 32-29 win.

No matter your rooting interests, you have to admit, this was a highly entertaining football game.

'I thought tonight was the night': Brutal trend under Scott Frost continues as No. 9 Michigan escapes Nebraska

Nebraska, in the midst of a Big Ten title chase, trailed Ohio State 9-2 in the sixth inning in the first of three weekend games.

The Huskers could have shifted their focus to Indiana, their nightcap opponent, but no.

Nebraska scored the next nine runs to stun Ohio State 11-9. The cherry on top was Jaxon Hallmark's tiebreaking RBI single in the ninth inning.

The way the season finished, Nebraska's dominant 56-7 win against Northwestern felt like it occurred in 2018. Indeed, it was 2021.

NU rolled up 657 yards, including 427 rushing yards in a rare conference game rout to move to 3-3.

The pre-fourth quarter light show had the crowd buzzing and after the final whistle, it was bring on Michigan.

NU would lose its final six games, but on this night, O Street was hopping and Husker fans were talking bowl plans.

'Man did we run it better': Huskers roll up 427 rushing yards, seven TDs in 56-7 rout of Northwestern

In a strange spring season that was, including the entire NCAA Tournament being played in Omaha, the Huskers made another familiar run through the field, reaching the Elite Eight.

Standing in the way in the Sweet 16 was Baylor and national player of the year Yossiana Pressley, and NU was without All-American Lauren Stivrins, who was injured.

'We proved a lot of people wrong': Without Stivrins, Nebraska sweeps into regional final

The signature win of the Huskers' 2020-21 season came against the then-unbeaten Buckeyes, who arrived at PBA ranked 15th nationally.

NU was without second-leading scorer Isabelle Bourne, so the Huskers needed someone to step up.

'We like to win, what can I say': Nebraska beats No. 15 Ohio State for third upset of season

9. 4OT with the Wolfpack

Was it a pretty game? Nope. But add an overtime period and expect some drama.

Nebraska and North Carolina State needed four extra sessions to decide this one, with the Wolfpack coming out on top 104-100.

The Huskers had numerous chances to win before losing a game that also featured a second-half scuffle (remember an injured Trey McGowens on the floor with his scooter?)

Yup, this one had a little bit of everything.

10. Picking up steam against Boilers

Nebraska lost to No. 5 Wisconsin in four sets a day earlier, so the question was how would the Huskers respond against another top-10 team.

The Huskers had an immediate answer.

How big was this win? What followed was a run to the national championship match.

'They should feel really proud': Nebraska finishes regular season with win against No. 6 Purdue

NU baseball at Arkansas (June 7): Game tied at 2-2 in the eighth inning before Hogs escape 6-2 to win regional.

NU baseball vs. Rutgers (May 10): NU scores six in the first inning, but doesn't score again until the 13th inning; prevails 7-6.

NU football at Wisconsin (Nov. 20): Despite miscues, including game-opening kickoff for TD by the Badgers, NU goes toe-and-toe with the No. 19 team.

Kayla Caffey plans return to Nebraska volleyball, but eligibility pending for next season

Kayla Caffey plans to return for another season with Nebraska volleyball, but the Huskers will await a ruling on her eligibility from the NCAA.

“She could have (placed) in the Big Ten meet last year in the discus just walking out on the track and throwing,” Pepin said of Meyer.

If NCAA approves it, Kayla Caffey plans to play for Nebraska volleyball in 2022

Nicklin Hames may no longer the Huskers' starting setter in 2022, but she plans on providing enough support and leadership to get Nebraska volleyball another shot at a national title.

Three-time Olympic medalist and former Husker Jordan Larson has been hired by Texas volleyball as an assistant coach.

The father of Nebraska volleyball’s four-year starting setter Nicklin Hames said on a podcast that she will return for one more season with the Huskers in a new role.

Schwarzenbach will play for Tyler Hildebrand, her position coach at Nebraska the past two seasons.

Jordan Larson will wrap up her playing career then jump right into a full-time gig with the Longhorns. Here's how it all came together.

Nebraska's Lauren Stivrins celebrates a point against Texas at Gregory Gymnasium in Austin, Texas, on Dec. 11.

Nebraska's Spencer Schwellenbach is welcomed after closing out an inning against Arkansas during their NCAA regional game on June 6 in Fayetteville, Ark.

Nebraska wide receiver Zavier Betts (15) scores on an 83-yard run in the third quarter against Northwestern on Oct. 2 at Memorial Stadium.